The most humble man in Hollywood: Steven Spielberg by Ken Levine 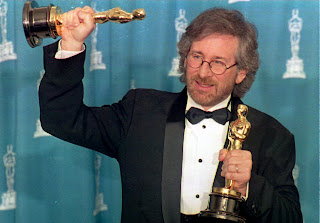 The most humble man in Hollywood: Steven Spielberg

Ed here: The politics of the Academy Awards has always fascinated me. P.T. Barnum had nothing on the guys and gals who try and advert their client to modestly accepting his/her award for all humanity. But Ken Levine posts that all previous spectacular assaults on common sense and good taste have now been surpassed by Steven Spielberg.

Ken Levine:
In Daniel Day-Lewis’ acceptance speech at the Golden Globes he fawned all over Steven Spielberg and praised him for his “humility.” Steven nodded graciously as if to say, “Yes, that’s me alright.” And I thought – humility? On what planet are we on here? This man has one of the largest egos in the ego capital of the world. He is enormously talented. There’s no denying that. And he has made some wonderful films. This isn’t Michael Bay we’re talking about. I have tremendous respect for Steven Spielberg as a filmmaker.

But “humility?” Gimme a break! This is the man who orchestrated getting a former president of the United States to introduce his film clip at a made-up award ceremony. It wasn’t enough to have some pompous thespian like Jeremy Irons regale the world with what a genius he is, he had to have the former leader of the free world. And make no mistake -- it was Steven who arranged it. Seeing Bill Clinton at the Golden Globes was like seeing Paul McCartney singing at the new Jiffy Lube grand opening in Pacoima.

A humble man might’ve thought that was overkill.

for the rest go here:
http://kenlevine.blogspot.com/2013/01/the-most-humble-man-in-hollywood-steven.html
Posted by Ed Gorman at 9:42 AM

I so agree with this. And I have become bored with his films. There is never a single surprise in them-no nuance, no risk-taking. He takes on topics with no controversy but then acts as if he has done something noble. Same thing with Tom Hanks. These guys confuse themselves with the parts they play or the movies they direct.

Ken is a damn good baseball broadcaster too, and that's a rare compliment in a field full of hometowners and lousy play-by-play calling.San Francisco has the best TV/Radio team of all and Ken is highly respected there.
TWB