Roger Ebert on Hithcock's "Shadow of A Doubt" 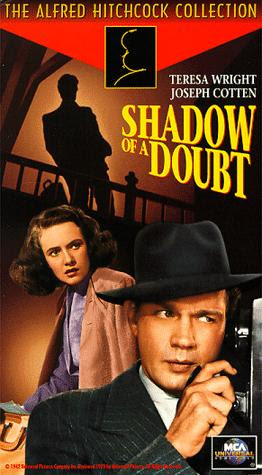 No one would ever accuse Alfred Hitchcock's "Shadow of a Doubt" of being plausible, but it is framed so distinctively in the Hitchcock style that it plays firmly and never breaks out of the story. Later you question the absurdity of two detectives following a suspect from New York to California, apparently without being sure of how he looks, and hanging around idly outside his residence for weeks while chatting up the suspect's niece; one of them eventually even proposes marriage. Nor are we convinced that the niece, believing her uncle is a killer of old ladies, would allow him to buy her silence by promising to leave town (because his guilt would "destroy her mother").
One of Hitchcock's favorite subjects was The Innocent Man Wrongly Accused. In "Shadow of a Doubt," there's no possibility of innocence. It's clear from the outset that Uncle Charlie (Joseph Cotten) is the notorious "Merry Widow Killer," and more than once Hitchcock cuts to nightmarish fantasies of (presumably) merry widows waltzing. We first see Charlie lying on top of his bed, smoking a cigar, when told by his landlady two men had been asking for him. He sees them standing on the corner downstairs, packs a bag with cash, leaves the house and boldly walks right past them. This demonstrates they don't know what he looks like, but not why they wouldn't be interested inanyman leaving the boarding house. The incompetence, and apparently unlimited expense account, of these two cops is one reason the action can span several weeks.
Charlie's peppy niece Charlotte (Teresa Wright), nicknamed "Young Charlie" after her uncle, has idolized him for years, and complains to her family that life wouldn't be so dull if he paid them a visit. Amazingly, that day they receive a telegram telling them to expect him. In a well-known shot Hitchcock shows Charlie's train arriving beneath an ominous cloud of black smoke. He has arrived in Santa Rosa, California, a paragon of small towns that could have modeled for Norman Rockwell'sSaturday Evening Postcovers.
The town and the Newton family play major roles in the film, and may reveal Hitchcock's own inner feelings. He shot in late 1941 and early1942, at the outset of World War II, at a time when he was unable to visit his dying mother in London because of wartime restrictions. He later credited the friendliness of the town for making this the most pleasant of all his film locations. His emphasis on the comfy Newton home, a chatty neighborhood, a corner cop who knows everyone's name, the nightly meals around a big dining table--all add up to a security that both he and Uncle Charlie were seeking, and Charlie rhapsodizes about the joys of home and family. The visiting uncle is so quickly embraced by the town there is even a ceremony in his honor.
What we begin with, then, is the innocent Newton family and the sinister uncle, who moves into Young Charlie's room at the top of the stairs. Also in the family are her father Joseph (Henry Travers), her mother Emma (Patricia Collinge), and her young sister Ann (Edna May Wonacott) and brother Roger (Charles Bates). Travers was in his late 60s and Collinge around 50 when the film was made, and they look on the old side for Ann and Roger's parents but about right for the movie's apple pie symbolism. The next door neighbor, who drops in without knocking, is Herb (Hume Cronyn, in his movie debut). He and Joseph are crime buffs and spend much time in debates about methods of committing a perfect murder. Their asides are funny in themselves, and more so because of Uncle Charlie's discomfiture. His preferred method is strangulation with his bare hands.

This is one of the scariest movies I have ever seen.