Jobs I Wish I Had 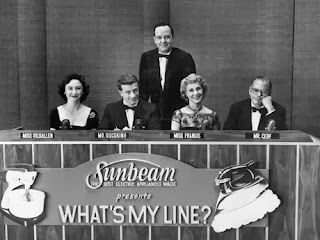 Starting a new feature I’ll do from time to time. “Jobs I Wish I Had.” We all have them. We grow out of most of them, but not all. Secretly, don’t you still wish you could be a ballerina or Navy Seal?

And then there are the jobs you’d love to have but no longer exist. Big band crooner, flapper, Czar of Russia.

Lately the GSN has been showing old black-and-white episodes of I’VE GOT A SECRET and WHAT’S MY LINE? in the middle of the night. (I think contractually they have to play them for so many days a year.) These were old musty game shows from the ‘50s and ‘60s. By today’s standard they are positively archaic. A panel of four personalities must guess the contestants’ job or secret.  That's it.  There was zero production value and if a contestant stumped the panel they won the whopping sum of $50. The shows were aired live (for the east coast anyway). Today they're great fun to watch.

WHAT’S MY LINE? was originally on CBS at (I believe) 10:30 p.m. The panelists all wore tuxedos and formal gowns. The host, John Daly was the most erudite emcee in the history of television. If there are 500,000 words in the English language, he knew and used 469,000 of them – each week. Everyone was very formal. Ms. Francis. Mr. Cerf. Ms. Kilgallen.

When little kids are asked what they want to be when they grow up they’ll often say fireman, or actress, or cowboy, or fashion model. I wanted to be a panelist. And you know what? I still do. Too bad those gigs have gone the way of the 8-Track tape.

Think about it. Sunday night. You go out and have a nice dinner in Manhattan. Roll into CBS at 10:00. Don your tuxedo and get made up. There’s nothing to prepare. You’re not supposed to know what will be on the show. You do the show live at 10:30. You play this parlor game and (in my case) say a few witty lines and get a couple of laughs. At 11:00 you’re done. No pick ups. No alternate takes.   By 11:15 you’re in a bar. For this you are handsomely paid, you’re famous, and these shows lasted upwards of fifteen years. You have job security.

You parlay this into appearing on other panels. Ka-ching!! You trade on your fame and write books (or have others ghost write them for you), speak at events for absurd fees, score lucrative commercial endorsements (“Hi, this is Ken Levine for Studerbaker!”), and be invited to all the A-list society parties. Judy Garland could pass out in my lap.

I was always amused when one of these panelists missed a show because he was on vacation. Vacation from WHAT? A half-hour a week?

There are very few panelist opportunities today. The Red Eye overnight show on FOX NEWS and I’d love to do that program. Bill Maher’s HBO show, Chelsea Handler’s E! show – these are two others. But slim pickings for sure. What few celebrity game shows there are require you must be a has-been from some ‘70s sitcom. Rarely does the casting call go out for never-beens. So I’m at a distinct disadvantage there.

But that’s one of the jobs I wish I had had. What about you? What’s Your Fantasy Line?

Another perk of being a panelist is you can plug your book. Available on Kindle for $2.99. Without that forum how will I ever plug mine?
Posted by Ed Gorman at 12:25 PM