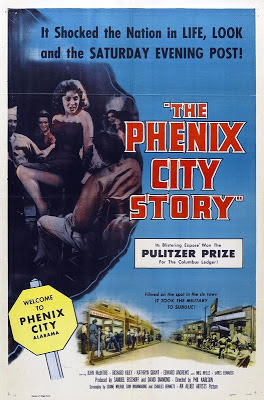 Ed here: Watched this yesterday. Really holds up. Sweaty gritty and very Erskine Caldwell Southern. Here's an excellent piece from Film Noir of The Week. Oh and by the way I forgot to mention that "Episodes" is on Showtime.
Phil Karlson was never more than a B-movie director and he was proud of it. While working for Monogram Pictures the young director was paid $250 a week working on their film assembly line. In 1946, he churned out eight movies! Back then, movie companies like Monogram owned the movie theaters their films played in. This monopoly setup (later broken up) pretty much guaranteed that any B-movie -whether it was a western or crime film- Monogram churned out would turn a profit.

Monogram was known for releasing cheap predictable movies (like the later Charlie Chan and Shadow movie series) that cost the company next to nothing to produce. Karlson, who began his film career working part time while going to law school fell in love with movie making. He worked his way up the ranks doing every movie job going from prop man to, after serving in World War II, film director. Eventually Karlson was put under contract by Monogram Pictures.

In the late 1940s, the chiefs at Monogram, wanting to make their brand appear more artistic to film goers and newspaper critics, began putting out bigger budget films under their new name Allied Artists. Karlson (who made AA's first “important” picture, Black Gold) was asked to begin making better (more expensive) movies. The Karlson-directed AA crime films released in the 1950s where far from being big-budget A films, but they were a long way from the 4 or 5 day movie shoots with no budget cheapies Karlson cut his teeth with. One of Karlson's best was one released in 1955, The Phenix City Story. True, Karlson churned out five movies that year for Allied Artists and Columbia Pictures, but this one stood out for its gritty realism due to the film being shot in the Alabama town during the same time the actual trial for the real-life killing was taking place.

The highly fictionalized story was based on fact. In 1954, in a series of events that no doubt reminded Karlson of his youth in Al Capone-era Chicago, became famous when reporters dubbed the Alabama town “Sin City.” Drugs were sold openly, prostitutes solicited johns on the street corners, and sleazy clubs offered gambling. Not seen by the citizens and army men from Fort Benning that visited the town for pleasure were other even more sleazy rackets including a safe-cracking school and a black-market baby ring. It wasn't until the state's attorney general elect – who campaigned with the promise that he would clean up the city --was murdered in 1954 did the citizens demand action against the criminal element. After the killing, the national guard was sent in and the major crime bosses fled. This was exactly the type of story that B-thriller semidocumentaries were made from. And it was -- the very next year.

I teach in a college that's about a hundred miles from Phenix City--I showed the movie last semester and the class really enjoyed it. Columbus State University, across the state line in Georgia, did a great exhibit on the film and the real story a few years ago.