Gravetapping - Ben Boulden on covers that caught his eyes


Posted: 28 Mar 2014 04:06 PM PDT
Utah Blaine is the second of three Louis L’Amour novels published by Ace.  It was originally published as by Jim Mayo and made its debut as one half of an Ace Double (D-48) in 1954. The artwork of the original paperback isn’t bad, but getting a copy could set your retirement back.
The edition that caught my eye was an early 1970s Ace reprint.  It has an alarmingly orange cover—something close to post-apocalyptic as it seems to devour the town in the background—a gunman on an angry horse firing at someone offstage.  It appears there is something close to artillery kicking up dirt geysers (actually rifle slug impacts, I’m sure).  It is a scene straight from a comic book, and I love it.  The artist is uncredited. 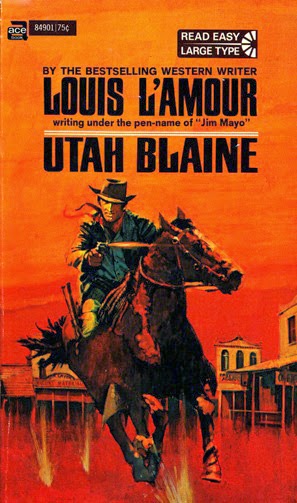 The opening paragraph:
“He was asleep and then he was awake. His eyes flared wide and he held himself still, staring staring into the darkness, his ears reaching for sound.”
I read this title as a teenager and I can barely remember the plot, but I do remember I enjoyed it. I know the edition I read was issued by Bantam in the 1980s.  The thing I really like about this old Ace paperback.  It informs the customer it is Louis L’Amour “writing under the pen-name ‘Jim Mayo’”. 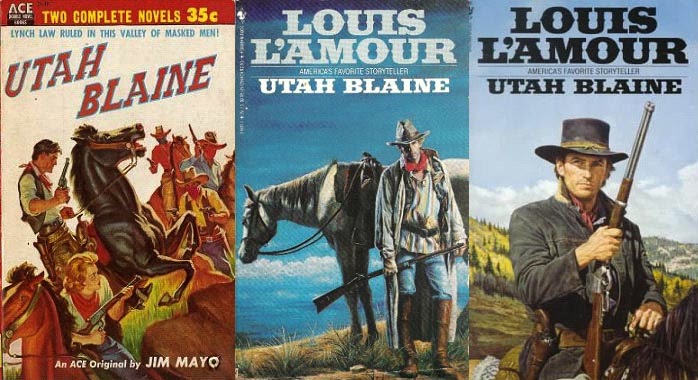 This is the fourth in a new series of posts featuring cover and miscellany of books I find at thrift stores and used bookshops.  It is reserved for books I purchased as much for the cover art as for the story or the author.
Posted by Ed Gorman at 12:50 PM