THE CLASSIC WESTERN IN TWILIGHT: SHOOT OUT by Fred Blosser 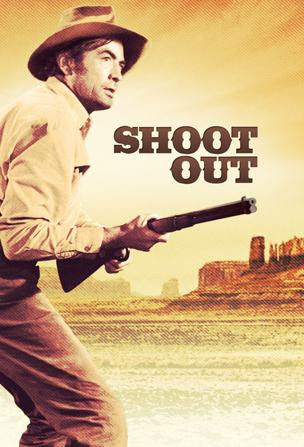 THE CLASSIC WESTERN IN TWILIGHT: SHOOT OUT
by Fred Blosser

Shoot Out, the final Western by the great Henry Hathaway, mostly earned poor critical notices when it played movie theaters in 1971.  Roger Greenspun’s New York Times review called it “the kind of movie that everyone walks through.”  Others dismissed it as an unsuccessful attempt by Hathaway (director), Hal Wallis (producer) and Marguerite Roberts (screenwriter) to ride the coattails of their earlier collaboration on True Grit.

Critics might have been kinder if they had known that the classic American Western was headed for slow extinction by 1971, as Hathaway and other elder statesmen of the genre drifted into retirement or death.    From a vantage point more than 40 years on, Shoot Out isn’t a masterpiece to rank with True Grit or Hathaway’s 1958 feature From Hell to Texas (a favorite of William K. Everson’s), but it’s better than the drubbing by Greenspun, Charles Champlin of the Los Angeles Times, and other contemporary critics would imply.

Released from prison, bank robber Clay Lomax (Gregory Peck) sets out to find his partner Foley (James Gregory), who shot him in the back on their last job, left him for dead, and got away with the haul.  Lomax wires his former girlfriend Teresa, a prostitute, to bring him the savings he had entrusted to her before the robbery.  Teresa dies en route, and in addition to the the cash, she leaves Lomax her eight-year-old daughter Decky (Dawn Lyn), whom Lomax assumes is also his daughter.

As you’d expect from Hathaway, the visual style of the movie is clean and straightforward, filmed against beautiful New Mexico and California wilderness scenery.  Hathaway employs Peck’s reserved demeanor to good effect, helping the movie mostly steer clear of bathos, as Lomax slowly warms to the idea of being a father and begins to see a purpose in life other than revenge.

In Little House on the Prairie, Lomax would have found a welcoming home for the little girl among the respectable townsfolk.  Here, the local preacher suggests she be turned over to the marshal.  So do the storekeeper and his wife, who says, “I never wanted children anyway.”  The only person Lomax meets with parental feelings is a lonely widow rancher with a young son (Pat Quinn), who takes him and Decky in out of a storm.

Leonard Maltin’s review faults the movie for more talk than action, but there’s a fair amount of gunplay, and the dialogue underscores the realism of Hathaway’s West, where circumstances can force a good person into a dilemma that presents no easy out.  When Bobby J. invades the widow’s home, sadistically insists on demonstrating his skill with a gun by shooting a cup off one of the kids’ heads, and asks the widow to choose which kid it will be, her boy or Decky, she chooses Decky.  “I’m so sorry, but it was my son,” the widow later tearfully apologizes.  “Likely I’d have done the same in your place by choosing the boy,” Lomax concedes.

There is a happy ending, and end-of-career appearances by the great Western veterans Paul Fix, Jeff Corey, Arthur Hunnicutt, and Willis Bouchey in bit parts. The late John Davis Chandler plays Skeeter.  No one ever played unstable but pathetic losers of society as well as John Davis Chandler did.

Nicely reviewed. I enjoyed this western and found the racy realism balanced out the sentimentality in Peck's relationship to the girl. The home invasion sequence, however, seemed needlessly heavy-handed.