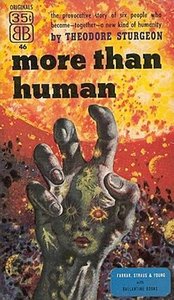 The Innumerable Short Stories of Theodore Sturgeon
by Andrew Liptak on March 13, 2014
https://www.kirkusreviews.com/features/innumerable-short-stories-theodore-sturgeon/

Some authors make a name for themselves with a handful of acclaimed and popular stories (Ted Chiang), while others go for sheer volume (Isaac Asimov), and then there’s a couple who are popular for their sheer volume and consistent quality of stories. Theodore Sturgeon was one such author writing during the middle of the science-fiction boom of the 20th century, putting together some of the genre’s best known and beloved works over the course of his long career as an author.
Born Edward Hamilton Waldo on February 26th, 1918, the future science-fiction author came from a troubled household. His father, Edward Molineaux Waldo, was absent for most of his early childhood, and eventually divorced his mother in 1927. With his mother’s remarriage two years later, Edward received a new last name, Sturgeon, and an indifferent stepfather who appears to have been exceptionally cold toward his adopted children. The young Sturgeon faced further difficulties in his teenage years: an exceptional gymnast, he contracted rheumatic fever, which affected his heart and ended his potential career. His stepfather introduced him to some science fiction, even as he forbade pulp magazines: They read stories such as The Time Machine by H.G. Wells and Twenty Thousand Leagues under the Sea by Jules Verne. Over the years, Sturgeon picked up a range of the forbidden pulp magazines and read authors such as Lord Dunsany, William Hope Hodgeson, William Morris and others.
After high school, Sturgeon left for the Penn State Nautical School, where he enrolled for a single term before leaving for the sea, working on a ship’s engine room. It was over the next three years that he began his incredible fiction output. He sold his first story to McClure's Newspaper Syndicate in 1937, and followed up with over 40 others, eventually making his way back to New York City.