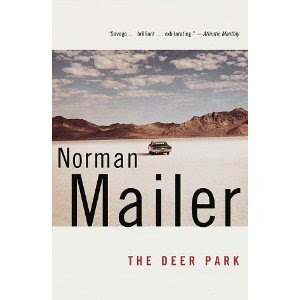 Ed here: I was fifteen when I first read The Deer Park by Norman Mailer. I've never forgotten the experience because of the sheer narcotic power of the writing and because it introduced me to a style of contemporary writing I'd never encountered before. I became a Mailer fan, even when he was at his most assholic and clownish, for life.
The book arrived in 1955 with a great deal of advance publicity. Rinehart, its original publisher, refuse to put it out because they suddenly judged it obscene. Putnam picked it up and Mailer was seized upon by every hack reviewer and dimwit moralizer in the land.
The Deer Park is a tale told by a former Air Force man who decides to become a novelist and is thus drawn to the writers, directors and actors of Desert D`Or.
Here we meet the leftist movie director who maybe have to cooperate with the McCarthyites to save his career; the beautiful young actress whom I imagine looks like Tuesday Weld but has the same death wish as James Dean; and a pimp Mailer succeeds in making sympathetic. (I'm getting this from a 1955 Times review which was one of the few mostly favorable ones Mailer could claim.) In fact by rereading it a few months ago I was was surprised to find how much the narrator (and Mailer) sympathizes with people who in popular fiction are considered trash of a kind. The story evolves from the personal crises that these three people face.
For its time the book is remarkably sexual and remarkably violent--there is a scene in here that would make the Faulkner of Sanctuary queasy--and speaks in an American leftist voice that is hip without being pretentious.
In all there is madness and sadness in Desert D'or and any Hollywood novel that came after has to be measured against it. It is not a masterpiece but it is a fine brave novel about an America that most Americans despised. And, in fact, still do.
Posted by Ed Gorman at 1:35 PM

It's hard to believe that Mailer is already fading from the literary scene. Or has faded entirely.

I've discovered Mailer like two years ago. Read DEER PARK, EXECUTIONER'S SONG & AMERICAN DREAM. I'm surprised how difficult it is to get a hold of his books, because he wrote so many great novels and non-fiction. Hopefully he doesn't fall into oblivion. Very important writer.

Yet another author I still need to explore...

His nonfiction tends to be ridiculous.