The latest Dead Man novel is out now, and it's a good one! 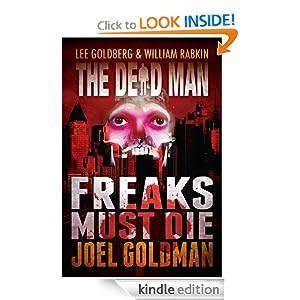 The latest Dead Man novel is out now, and it's a good one! Grab a copy!

Amazon.com: Freaks Must Die (Dead Man #10) eBook: Joel Goldman, Lee Goldberg, William Rabkin: Kindle Store: When Matt Cahill intervenes in what he thinks is a robbery, he ends up botching a ransom exchange for a kidnapped boy. His interference gets an innocent man killed and puts a child’s life in immediate jeopardy. So Matt heads to New York City, a place as foreign to him as a distant planet, to rescue the boy and make amends.

His search leads him to an underworld of “freaks,” people with uncanny powers who live in the shadows, trying to elude a dark force that’s ruthlessly hunting them down. Now Matt is in a race against time to save a child, and the entire freak community, from bloody annihilation.