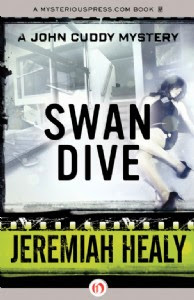 Jeremiah Healy (b. 1948) is the creator of the John Francis Cuddy private-investigator series and the author of several legal thrillers. A former sheriff's officer and military police captain, Healy is also a graduate of Rutgers College and the Harvard Law School. He practiced law in Boston before teaching for eighteen years at the New England School of Law. His first novel, Blunt Darts, was published in 1984 and introduced Cuddy, the Boston-based private eye who has become Healy's best-known character. Moral, honest--and violent, when need-be--Cuddy makes his living solving cases that have fallen through the cracks of the formal judicial system. Healy has continued to feature the character in shorter fiction. Of his thirteen Cuddy novels and two collections of short stories, fifteen of Healy's works have either won or been nominated for the Shamus Award.

Healy has served as the president of the Private Eye Writers of America and the world-wide president of the International Association of Crime Writers. He has chaired committees for both the Shamus and Edgar Awards and has served twice on the National Board of Directors of the Mystery Writers of America. Healy has spoken on crime-writing at the Sorbonne in Paris, the Smithsonian Institution's Literature Series and the Boston Globe Book Festival, and at conferences around the world. He is currently working on a new Cuddy novel. You can find his website at this link.

“[Healy’s] gifts include an unerring eye and ear that invest all the characters with life.” - Publishers Weekly

The Staked Goat by Jeremiah Healy

Right to Die by Jeremiah Healy

Act of God by Jeremiah Healy