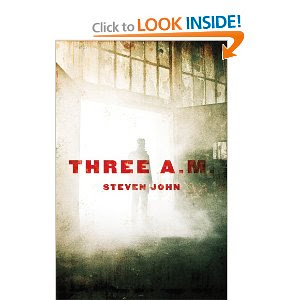 My first novel, Three A.M., was published on March 27th. That was three days ago as I type these words. It still seems rather surreal to me, frankly. Three days ago I found myself addressing a few dozen people at a Barnes & Noble where heretofore I had frequently purchased books (and other sundries) but now was speaking about my own novel and seated between a poster of its cover and a stack of copies.

I had prepared a few remarks (for example I had thought through a comment that turned out to be fitting about sharing with those gathered a moment I knew I would never forget) but planned to speak mostly off the cuff. Which I did, and I believe I convinced people that I had done much more preparation than was the case.

In fact, within a few minutes of stepping up to the podium I felt quite at home talking about the book itself and the years of work and waiting that had come between my typing its first words in 2009 and the release date in 2012. Indeed there was only one moment when I found myself the proverbial deer in the headlights.

From the back of the audience, a gentleman (a man I did not know—much of those gathered were friends and family) raised his hand and asked: “What themes inform your writing?”

I nodded, a knowing smile on my pursed lips while thinking: “Oh… shit.” It was a simple yet astute question, and one which, I quickly realized, I had never really thought about. For what felt like a long while but what was likely only a few blinks (amazing how fast the mind can work, even if its labors are fruitless, no? This time I think I pulled through OK, though. You’ll see sometime after I end this protracted parenthetical) I stood silently, then I felt a breath coming in and then it was turning around and vocal chords were vibrating within me and I said “Good and evil.”

Then I paused again, weighing whether to run with it or cut my losses and take a different question. I ran with it. And despite never having consciously considered theme while writing Three A.M., I think just maybe good old Good and Evil was the right answer. I went on speaking and described how in many ways the book’s protagonist, Thomas Vale, is a perfect antihero-cum-hero when viewed through the lens of the hero’s journey, when compared to mythological figures, etc. He lives in a dark world (metaphorically and in practice) peopled by shady if not outright evil people and informed by self-service if not outright corruption. And when tested, Vale rises up and fights back against the evil, ready to prevail or die.

Is he not Theseus emerging from Hades? A Norseman of legend emerging from the depths of winter? Or… something more cogent? Don’t worry, I didn’t ramble on with specific examples. Rather I spoke of the simple yet universal concept of what happens when Good meets Evil and I explained how, at least on a subconscious level, that was the way in which this book and its protagonist came to life. I had an idea for a setting—a world enshrouded by thick, unending fog—and wanted to set a story in it. Once I had a character in mind and the loose arc of the story, I simply asked (repeatedly, in a variety of situations and in dealing with a range of people) “What would this man do?” Thus he became ever more “real” and thus he could navigate his way through the world, creating the story.

And as I thought about it while standing at that lectern on Tuesday and as I dwell on it at more length now, that simple question really is the most important one of all: When a given situation arises, What Will You Do?

In the case of Tom Vale and his experiences in Three A.M.—contrary to what Vale would likely have thought himself capable of doing—when evil (or adversity or corruption) confronts him, he fights back. We would all like to think of ourselves as ones who would do the same, but fortunately for us, we are seldom tested.