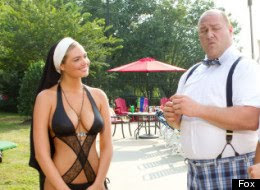 Ed here: First of all as Jon Stewart and others have pointed out The Catholic League consists of sweaty crazed drooling (literally) Bill Donohue and six of his moron in-laws. Second of all I went to Catholic school and the nuns dressed exactly like the one in the picture. In fact this one looks very much like my sixth grade sister. I would testify to that under oath.

------"The Three Stooges" opens around the country today (April 13th), but there is one group that has already deemed the film a stinker.

The Catholic League's President, Bill Donohue, has put out a statement condemning the movie for its disrespectful portrayal of Catholics, specifically nuns. Donohue claims that the movie is more evidence of the increasing hostility towards religion and Catholics in Hollywood:

In the 1950s, Hollywood generally avoided crude fare and was respectful of religion. Today it specializes in crudity and trashes Christianity, especially Catholicism. Enter the “The Three Stooges.” This movie is not just another remake: it is a cultural marker of sociological significance, and what it says about the way we’ve changed is not encouraging.

The film pushes the envelope with its portrayals of two unusual nuns portrayed by the bombshell Kate Upton, and "Curb Your Enthusiasm" creator Larry David. Both are potential causes for offense for different reasons as MovieFone reports:

In "Stooges," David portrays Sister Mary-Mengele. The name is a nod to the late Nazi Josef Mengele, an SS Officer who decided prisoners' fates at Auschwitz. As for Upton, it's not so much her character's name -- Sister Bernice -- as it is her attire. During one scene, the SI swimsuit model dons a very revealing bikini along with a large rosary around her neck.

Larry David probably didn't help the situation when he said his dressing as a nun made him understand why they are so mean. David explained:

"You know, the outfits might have something to do with that. Forget about the fact that they never have sex. If you gave me a choice of no sex or having to wear that outfit the rest of my life, I would definitely take the no sex... No wonder they're so crazy.”

I did not realize the Catholic Church still was involved in this kind of nonsense. All it does is make even more people rush out to see the "condemned" film.

Reminds me of when I was dating a Catholic girl in the 1960's and I attended church with her a couple times. The priest requested that everyone stand up and take the pledge to not read PLAYBOY MAGAZINE. I probably was the only one to not stand and boy, did it piss me off. To this day, I think the magazine printed some of the best fiction back then.

I call Katy Upton's portrayal of the nun extremely respectful.

I have no respect fore the Catholic church myself, but I could definitely respect nuns like this.

I attended Catholic school. Unfortunately, few wore a swimsuit with this much confidence.

Not that it matters, but Mr. Donohue's "Catholic League" is NOT an official arm of the Roman Catholic Church.
Never has been.

Come to think of it, neither was the "Legion Of Decency".

Just saying that you speak for a certain group doesn't make it so.
(No matter what FoxNews says.)

All of this is so much emedic lysitype.

(Funny how these recognition words can turn out to be weirdly appropriate ...)