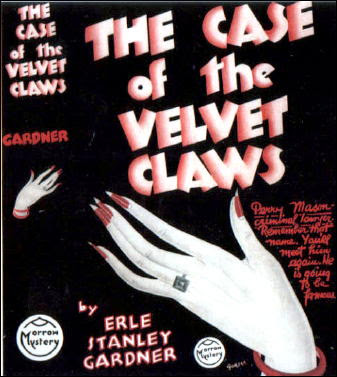 I've never been able to figure out why Raymond Chandler felt he owed such a literary debt to Erle Stanley Gardner. He told Gardner that he'd once copied a Gardner story so closely that he couldn't submit it for publication. I guess he felt it would look like plagiarism. But what did he learn from Gardner? Certainly not style. Certainly not dialogue. Certainly not structure. Writers learn from unlikely sources, true enough. But Chandler seemed to lavish so much praise on Gardner you have to wonder what inspired him exactly.

But Chandler was a snob and when you examine the nature of his praise, you get a sense he was being condescending. He said that only when you wrote at great speed (as Gardner did) could you make such unbeleivable plot turns palatable to otherwise sensible readers. I've always wondered what Gardner made of that. He was no fool.

All this comes to mind because I had several doctor appointments in the past few weeks and I'm always careful to bring fast and uncomplicated reads along with me. For the last few doc visits I brought along Perry Mason novels. Early Perry Mason novels, I should note, when Mason was still a creature of Black Mask rather than The Saturday Evening Post. Throughout his career he was wise enough to recognize one of the great true American boogeymen, big business. His social conscience came fom his days as a lawyer when he represented Native Americans, black Americans and Latino Americans in towns that did not want them.

I still find the Masons great reads for the most part.. True, Gardner worked with stereotypes--The Bad Wife, The Crooked Cop, The Loyal Servant--and he told his stories largely through (sometimes interminable) dialogue but while I'm reading them I'm almost always caught up in the puzzle he's given us. Nobody is what they claim to be. Everybody has a secret, usually a nasty one, the exception being the tortured person Mason has agreed to take on as a client, usually while shunning much more lucrative work.

The early Masons were written before Gardner decided to make his work "timeless." There is little place description in the later books. He didn't want to "date" them. I like the history I get from the first dozen Masons, from all of the Doug Selbys and even from the A.A. Fairs written during the war years. I enjoy sitting in the tea rooms, bars, mansions, hotels and trains of the Thirties and early Forties. His work became far less interesting when it was shorn of any physical specificity.

The Masons owe much more to the Golden Age than most critics seem to have noticed. Their plot pieces are no less unlikely, the clues no less exotic and the conclusions no less bombastic. But I'm not complaining. Most Golden Age stuff except for John Dickson Carr is difficult for me to gak down. But somehow Perry, Della and Paul make it all fun again.

I agree, Perry Mason novels are "fast and uncomplicated" and "great" reads. For me a Gardner novel is as much about the bond shared by Mason, Street, and Drake as they're about the plot twists and courtroom dramas and, of course, Hamilton Burger. Mason seems like a nice man to know, someone you can trust with your legal problem. I wonder if there really are lawyers like him. I re-read Perry Mason sometimes, as I do James Hadley Chase, paperbacks I read in college.

Like Prashant and you, I enjoy the early Perry Masons. The later Perry Masons are a struggle for me to read. When you're as prolific as Gardner was, the results are sometimes uneven.

I'll chime in with another in agreement, I like the early Masons (and a lot of the middle ones too) and always find them quick entertaining reading, just the thing for your doctor visit or an afternoon on the deck with an iced tea or something stronger. One thing I like is the way Paul Drake's role expands as the series goes on.