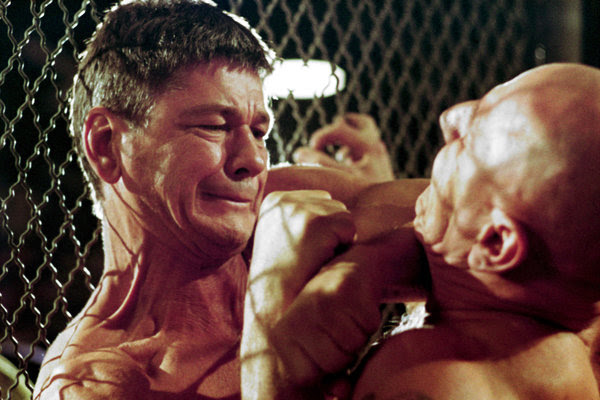 Ed here: Anear perfect picture that holds up to many viewings.
Bronson was never as good and this is
Walter Hill in one of his finest writing-directorial moments.

Down and Out Cold in the ’30s
By DAVE KEHR
Charles Bronson achieved stardom relatively late in life, after surviving a harsh childhood as one of 15 children of Polish-Lithuanian parents in the coal country of Pennsylvania, service as an aerial gunner in World War II and close to 20 years as a hard-working journeyman actor in Hollywood movies and TV shows. (That’s him, for example, as Vincent Price’s evil henchman in the 3-D “House of Wax” from 1953.)
It wasn’t until the late ’60s when, as one of several second-tier American stars who had found reliable employment in European genre films, that Bronson began to attract a following. Seeing the soulfulness in his sad eyes and scar-thickened face, Sergio Leone cast him as the soft-spoken, revenge-driven hero of “Once Upon a Time in the West” (1968), a film far more successful in Europe than it was in its heavily cut American release; a starring role in the French thriller “Rider on the Rain” (1970), directed by René Clément, gained him new critical respect in America, though paradoxically in an art-house context.
Entering his 50s, and without much time to lose, Bronson exploited his sudden popularity by appearing in a series of undistinguished crime films, directed by assorted British functionaries (Terence Young, Michael Winner, J. Lee Thompson), usually on European locations. (One important exception was Richard Fleischer’s taut 1974 “Mr. Majestyk,” adapted from a novel by Elmore Leonard.)
After the runaway success of Winner’s crude “Death Wish,” a Nixonian law-and-order fantasy with Bronson as a New York architect turned vigilante, Bronson seemed to abandon his ambitions as an actor and spent most of his late career walking through routine variations on the “Death Wish” formula (including four sequels), in frank pursuit of the paychecks that would allow him to maintain the large family he had founded with his wife (and frequent co-star) Jill Ireland. A waste of potential, perhaps — but for a man who had entered the coal mines at the age of 10, a choice Charles Bronson was entitled to make.
There was one film, though, that gave Bronson his due, that took a full and fair measure of his talent and significance and placed him in a context that summarized and extended his distinctive appeal.

I don't think I have seen "Hard Times" but I have always liked Bronson in his early films like "Once Upon a Time in the West," "The Great Escape," "The Magnificent Seven," and "The Dirty Dozen." He looked old in the "Death Wish" series. I haven't seen many of his films including those with wife Jill Ireland.