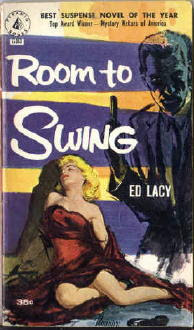 Ed here: I'm getting addicted to the site Pretty Sinister Books. Though I'm not interested in
some of the books reviewed generally the range of material covered (and covered intelligently)
is amazing. Here's one of my all-time favorite crime novels covered in Pretty Sinister.

I have a thing about the Edgar Awards. I happen to think a lot of the award winners didn't deserve that little statue of Poe. Only occasionally do I come across a truly worthy Edgar winning mystery novel. Room to Swing (1958) won the Edgar for Best Novel. It's most definitely one of the deserving winners. Not only that - it's a little known, little discussed, hardly reviewed at all, landmark novel in the history of crime fiction by a writer who deserves a lot more attention.

Toussaint Marcus Moore is a private detective hired by Kay Robbens, a TV executive, to shadow the subject of a soon to be aired reality TV show that sounds exactly like a 1950s version of "America's Most Wanted." The man, Robert Thomas, is wanted by Ohio police for a rape and assault of a teenage girl and Kay know he is currently living under an assumed name in Manhattan. Moore is to keep an eye on Thomas and make sure he doesn't leave New York until the show is aired. Then Kay hopes some TV viewer will spot Thomas, notify police, and he'll be arrested thus validating the purpose of the TV show and insuring it has a long run. But Thomas ends up dead, Moore is framed for the murder, and he flees the city. Moore is determined to clear his name, but in order to do that he needs to uncover who killed Thomas and why. He figures it's all linked to the rape case.

for the rest go here:
http://prettysinister.blogspot.com/search?q=room+to+swing
Posted by Ed Gorman at 11:13 AM

Thanks, Ed! Am I now an enabler? Very much appreciate the link to my lonely corner in cyberspace.