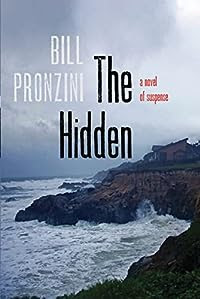 
I know, I know, since this was published not long ago, it's hardly forgotten. But it is one of those books that deserved much more promotion and notice than it received. Bill Pronzini the master of mixing shattered lives and violence and The Hidden is almost claustrophobic in its shadowy Woolrichian power.

Jay Macklin is a failed man. A career as a baseball player was ended early by injury. As were other attempts at establishing himself. His decade-plus marriage to Shelby was so solid and good for a long time but unemployment and heart trouble (the latter something she doesn't know about) have taken their toll. Shelby finds herself attracted to a doctor at the hospital where she works as a paramedic.

The novel brings Jay and Shelby together in an anxious attempt to find their old love and respect. They travel to a cottage in rugged Northern California only to meet Brian and Claire Lomax, a married couple who has even more problems than they do. They also become aware of a serial killer who has been traveling this same area. A power failure seems symbolic of their marriage's final days.

Pronzini has always been at his best dealing with smashed lives. HIs descriptions of violent weather and pitiless nature only enhance the emotional turbulence that make the drama so rich. Gripping, sinister, unpredictable, The Hidden is a sinewy novel of treachery and terror by a true master of the form.