One of The Rap Sheet's greatest-Be Cool, Elmore Leonard: Paying Homage to a Man Who Proved Hard Work Pays Off, 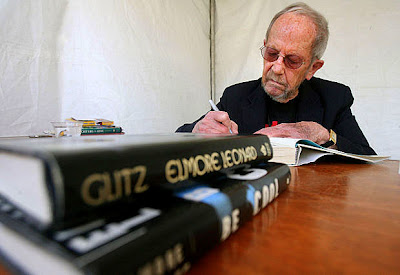 Ed here: Jeff Pierce at The Rap Sheet has written so many amazing pieces over the years.  Not to mention conducting dozens and dozens of extraordinary interviews.  I, as a blogger myself, have no idea how he is a) so productive and b) maintains his blog as the true voice of the mystery field. Nobody else could have written and collected and edited this definitive collage of comments on the life and times of Elmore Leonard. I've probably read twenty or so attempts to do something like this but none have come close. And there's Part Two to come.
Be Cool, Elmore Leonard: Paying Homage to a Man Who Proved Hard Work Pays Off, Part I
Like so many other enthusiastic readers of crime fiction, I was saddened to learn earlier this week that Elmore Leonard--the author known as the “Dickens of Detroit” (even though he’d long moved away to a suburb of Michigan’s largest city)--had died at age 87, aftersuffering a stroke last month. His novels had for so many years, and so consistently, fed my reading addiction (over the course of the last six decades, beginning before I was born, he’d produced almost a book a year!), that it was near-unthinkable to conceive of his prose spigot being turned off by such a bit player as mortality.

Despite the fact that I resided in Detroit for a while during the mid-1980s, and attended an abundance of literary events there, I never had the opportunity to meet Leonard. However, not long before I moved to the Motor City, I did correspond with him. At the time, I was employed in my first reporting job out of college, with Portland, Oregon’s “alternative newspaper,” Willamette Week, and as part of my efforts to assemble a special crime fiction-themed edition of that paper’s entertainment section, I sent letters out to a variety of mystery and thriller novelists whose names were familiar to me, even if--as was then the case with Leonard--I had not yet read much of their work. I asked each of the authors for suggestions of recent books in the genre that they’d recommend to others.

Leonard was generous enough to reply in a letter dated April 28, 1981. He specifically recommended Martin Cruz Smith’s Gorky Park and George V. Higgins’ Rat on Fire, and added that “My favorite suspense writers are Ira Levin [A Kiss Before Dying] and William Goldman[Marathon Man].” He also sent me a copy of Gold Coast, one of his earliest crime novels (after he’d made a modest reputation for himself by penning tales of the Old West), andapparently the last of Leonard’s works to be published straight to paperback in the United States. At the end of his letter, he wrote:


I’m enclosing my latest, which came out in December but was easily missed on the racks.