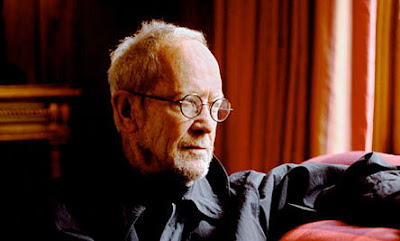 Ed here: Jeff Pierce posted this Saturday hence the funeral reference. Rich, deep, by turns somber,
funny and even wise, the posts here by various writers demonstrate why The Rap Sheet has become the
the most important of all mystery blogs.

The Rap Sheet:
A funeral was held earlier today for Elmore Leonard, the acclaimed Detroit, Michigan-area crime novelist who died this last Tuesday at age 87. Detroit Free Press staff reporter Jim Schaefer explains that Leonard’s Mass included “tears and laughter, and military honors for his time in the Navy during World War II.” He adds:

About 325 people gathered inside Holy Name Catholic Church in Birmingham on Saturday morning to say good-bye. The listeners included longtime friend Mike Lupica, a sportswriter and novelist, and Timothy Olyphant, an actor in the FX TV series “Justified,” which is based on Leonard’s works.

“Elmore truly was gifted with creativity, skill and talent,” the Rev. Joe Grimaldi said during his homily. “The twinkle in his eye showed he also enjoyed having fun.”

Fun was certainly had as well by Leonard’s millions of devoted readers. In Part II of The Rap Sheet’s tribute to this late author, posted below, we offer more than two dozen recollections of his work, as well as thoughts on his legacy, contributed by novelists and critics both. Part I of our feature can be enjoyed here.

Again, Rap Sheet readers may add their own thoughts on Leonard’s life and work in the Comments section at the end of this post.

Back in the early ’80s, before I’d published my first novel, I wrote Elmore Leonard a fan letter. In it I told him about my experience with teaching LaBrava (1983) in a university class and how delighted I was to find that a novel I loved also stood up to critical analysis. We’d spent a lot of time in class dissecting the book’s techniques. I mentioned we were particularly impressed with his use of black-and-white image patterns that recurred throughout the novel (which in part has to do with black-and-white movies and black-and-white photographs and black and white people). I was speaking as a fan and as a professor of English, and I really expected no response. However, a few weeks later I received a very gracious note from Elmore thanking me for my comments and expressing his gratitude that someone was teaching his novels in a literature class. But then he went on to say that he didn’t think he’d do very well in that course, because he had no idea in hell what an image pattern was.

Years later he wrote a wonderful blurb for my first novel, and afterwards we were thrown together on several occasions and got to know each other fairly well. At some point I learned that he’d incorporated my long-ago fan-boy letter to him in his “funny letters speech” that he gave regularly at libraries and on book tours. I was honored to have become a butt of Dutch’s jokes.

Whether or not Dutch Leonard was actually aware of the literary substance of his own work, we’ll never know for sure. But there’s a lot of evidence that he was quite a student of literature and read widely not just in the crime-fiction genre. To retain his blue-collar reputation, though, he couldn't admit to any of that. One of his friends and contemporaries, Bob Parker, had a Ph.D. in literature, but he rarely discussed that phase of his life and was happy to project the leather jacket version of himself. I think Dutch was cut from the same cloth as Parker. Every bit as smart and just as funny, and a writer who based many of his aesthetic values on Hemingway’s muscular, minimalist prose. A writer’s writer. A man who spawned a thousand painfully inadequate imitators.

But as they say in the sports world, you can’t teach quickness. In Dutch’s case, he’d mastered the poetic cadence of speech as only someone with a great ear can do. He often cited George V. Higgins as an influence on his dialogue and you can hear that, of course. But Dutch pushed into new territory. That dialogue in LaBrava and Stickand most of his best books is the heart and soul of the work. The characters come alive and inhabit three-dimensional worlds in large part because they talk with such crunchy energy. No one really talks that way. But everyone, in a perfect world, should.

for the rest go here: http://therapsheet.blogspot.com/2013/08/
be-cool-elmore-leonard-paying-homage-to_24.html
Posted by Ed Gorman at 7:51 AM