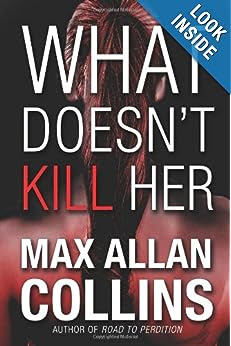 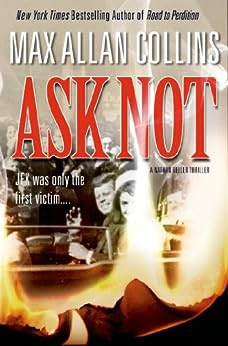 Ed here: I recently finished Early Crimes by Max and it's a fine read all the way through. It demonstrates that he had the right stuff from the git-go. He was as good in his teens as some writers are in their Thirties.


1. Tell us about your current novel or project.

Three books are coming out, one right after another, in August, September and October.  I don't relish this, since it's hard for each book to receive whatever its just attention might be, plus I can just see the "Collins just keeps crankin' 'em out" remarks coming in reviews.  But this is just one of the vagaries of publishing, which even the most moderately prolific author endures, since publishers pay little or no heed to what a writer's other publishers are up to.

EARLY CRIMES from Perfect Crime is a collection of sorts -- a short story, a novella and a previously unpublished novel.  These are all early works, the first two from the very beginning of my professional writing career.  The novel, SHOOT THE MOON, was a book my then-agent refused to show around.  It was written fairly early on, but after I'd made my first novel sales, including the initial Nolan, Mallory and Quarry novels.  I always thought it was publishable, and of all my novels it shows most the Westlake -- as opposed to Richard Stark -- influence on my work, as it's a comic caper novel.   Initially Perfect Crime was  going to bring just the novel out, but I requested that it be part of a collection, because I feared how people might react to it on its own.  I think the context of gathering all of my uncollected early work provides it some cover, frankly.

WHAT DOESN'T KILL HER is a thriller,  my first original novel for Amazon's Thomas & Mercer line, who have done so well reprinting my backlist titles.  The early reaction has been mixed, as some of the Amazon advance reviewers seem pissed off at me for not writing what they see as my usual historical fare.  Readers who've been with me for a while know that I hop around some.  I specifically wanted to accomplish two things -- first, I wanted to give an American twist to the kind of strong young female protagonist that resonated so well with readers in GIRL WITH THE DRAGON TATTOO; and second, I wanted to do a thriller that did not include the superstar forensics teams of my CSI, BONES and CRIMINAL MINDS tie-in novels, and the two J.C. Harrow thrillers I did with Matt Clemens at Kensington.  This is about real people, specifically members of a Victims of Violent Crimes support group, who have to draw upon their everyday skills and abilities to try to track down a killer that the authorities don't believe exists.  I think it came out very well, and I believe the overall reaction will be positive.  By the way, Matt Clemens assisted on this all the way, and though he doesn't share the byline, he gets a full-page credit inside the book.

ASK NOT is the new Nate Heller novel and it's the third of my JFK Trilogy.  Funny thing -- JFK himself appears in only one scene in the trilogy.  ASK NOT focuses on the suspicious number of assassination witnesses who wound up dead in the year or so after the crime.  Advance reviews on this one have been really, really good, I'm relieved to say.  Handling the JFK tragedy in a Heller novel has been a goal I've been heading toward since the very beginning, back in 1983, when TRUE DETECTIVE came out.  I always figured it would be the final Heller novel, but now I'm thinking about doing the RFK and Martin Luther King assassinations as well, and maybe Watergate.   I hope ASK NOT benefits from the 50th anniversary of the assassination generating general public interest and media attention.   Despite the countless non-fiction books on the subject (using the term "non-fiction" for some of the books is generous), I think ASK NOT breaks some significant new ground.
>
> 2. Can you give us a sense of what you’re working on now?

Coming up is a second thriller for Thomas & Mercer, SUPREME JUSTICE, a political novel.  After that I'll be doing ANTIQUES SWAP with my wife Barb -- we do those novels under the joint byline "Barbara Allan" -- and another Mike Hammer, working from a Spillane partial manuscript.  I'm thrilled that Titan has commissioned three more Hammers, as there's still significant unpublished Spillane material there to complete.  And of course I'm crossing my fingers that the HBO/Cinemax pilot of QUARRY gets picked up as a series, because the contract assures me of writing two episodes per every ten.  The two writers who wrote the pilot, Michael D. Fuller and Graham Gordy, did a great job and are real fans of the books, so working with them should be a pleasure.
>
> 3. What is the greatest pleasure of a writing career?

I think there are two, and these are intertwined.  First, and I mean this in a not wholly facetious way, avoiding what most people consider "honest labor" -- you know, a "real" job.  Those of us who can make a living doing this, which for all of us began as a love and a hobby, is a fantastic blessing.  Second, there's the satisfaction of holding the physical object that is your book in your hands -- to flip through it, look at it front and back, even smelling the damn thing.  If you grew up loving books, that's a pleasure beyond pleasure.
>
> 4. The greatest displeasure?

There are plenty of those, starting with the uncertainty of the freelance life.  On one day, I lost my DICK TRACY scripting job and had my current Nate Heller contract cancelled -- that was a rough time that Marty Greenberg got me through by giving me short story assignments...a guy named Gorman pitched in on that effort.  But on a day to day basis, I think it's bad reviews, especially unfair ones.  You can't respond to them, or at least you're not supposed to.  I do, on occasion, to my son's dismay.   I have never taken criticism well, and that's not a good trait in a writer.  You need a thick skin.  I don't really have one.  What I do have, though, is resilience.  I can get up and dust myself off and get right back at it.
>
> 5. Advice to the publishing world?

Don't fear the future -- look at ways to exist and thrive in it.  As a corollary, treat writers with consideration and respect -- "content providers" are your partners and the life blood of publishing, not just a necessary evil.
>
> 6. Are there any forgotten writers you’d like to see in print again?

I am pleased to have seen, and even helped a little, at getting Ennis Willie back into print.  The e-book revolution has brought a lot of things back into availability, if not "print" exactly.   I would like to see William March, author of THE BAD SEED, back in print and given the standing he deserves.  He's a wonderful writer and an artist -- sort of a coherent Faulkner.  On the detective side, I'd like to see Mike Roscoe's oddly poetic Johnny April mysteries get a new lease on life -- DEATH IS A ROUND BLACK BALL.  What a title.
>
> 7. Tell us about selling your first novel.

It was Christmas Eve, 1971.  I was at my low ebb.  Agent Knox Burger had had my first two novels, BAIT MONEY and NO CURE FOR DEATH, for a long, long time, getting nowhere.  BAIT MONEY, two years, easy.  NO CURE FOR DEATH, a year or so.  I had been teaching at a community college since September, still going to the University of Iowa for my last sessions at the Writers Workshop, and I feared that I would never be published.  I hated teaching and that was looking like my future, since it was the only job I'd prepared for, other than bussing tables and sacking groceries.   I had broken down in tears about this just days before to my lovely, understanding wife, Barb, who never lost faith in me.  Then on Christmas Eve, the letter from Knox Burger arrived -- Curtis Books had bought BAIT MONEY.   (On the next Christmas Eve, BAIT MONEY and the sequel I'd written immediately after the sale, BLOOD MONEY, arrived in freshly minted paperback.)  NO CURE FOR DEATH sold to Curtis a week after BAIT MONEY.  My mentor Don Westlake said, "Sometimes God acts like O. Henry and there's nothing to be done about it."