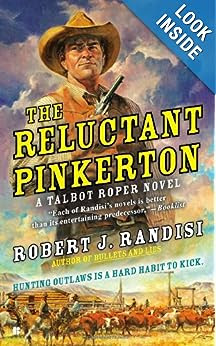 GREAT QUESTION!  It’s been a good summer for my books.  The second book in my ROPER western P.I. series, THE RELUCTANT PINKERTON is out. Also, the 8th Rat Pack book, YOU MAKE ME FEEL SO DEAD, which features not only the Rat Pack, but Elvis. And the book I’ve been waiting for, the first in a new Nashville based P.I. series called THE HONKY TONK BIG HOSS BOOGIE. This book was supposed to be published last August as The Session Man, which means it would have predated the successful Nashville t.v. series, but the publisher went belly up and I had to find someone new to publish it. My thanks to John Boland at Perfect Crime for seeing the book’s merits. I intend to do more.
In addition, a bunch of the westerns Amazon picked up from Dorchester are out, more of the early Gunsmiths (I think they’re up to #12), and three mysteries have been published as ebooks by Crossroads Press (THE TURNER JOURNALS, COLD BLOODED and THE OFFER). Also, my crime anthology CRIME SQUARE is out.

I’m working on the first of three original crime novels I intend to do for an epublisher (they haven’t announced it yet, so I’m sworn to secrecy), also Gunsmith #390, and an original mystery I’m doing for Crossroad Press.  I’m putting some original books out there as ebooks to see what happens. I also have a western anthology I’m working on for Piccadilly Press to do as an ebook.

I still get a big bang out of getting a carton in the mail of my new book (a pleasure that will go away if and when ebooks completely replace print books). I love holding it in my hands, especially if it has a great cover.  The three crime novels that Crossroad Press has reprinted have GREAT covers, and I can’t hold ‘em!

The way the business is changing. To me the word “Progress” does not mean “better.” I know, I’m an old fart.

Don’t be in such a hurry to pronounce the print book dead.

Warwick Downing’s first three books should be read and reread, especially THE GAMBLER, THE MINSTREL AND THE DANCE HALL QUEEN. And I’d like to see all 12 of Ralph Dennis’ HARDMAN books reprinted. It’s an excellent P.I. series that was twice packaged to look like men’s adventure.

Much too long a story. It was called THE DISAPPEARANCE OF PENNY, and was supposed to be the first of four Henry Po novels.  However, before I could do a second the publisher asked me if I could write westerns. That lead to the creation of THE GUNSMITH series.  There were no more Henry Po Novels.