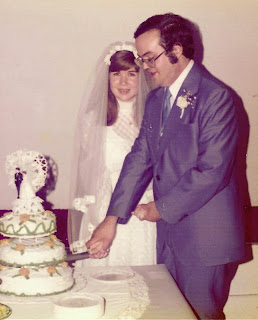 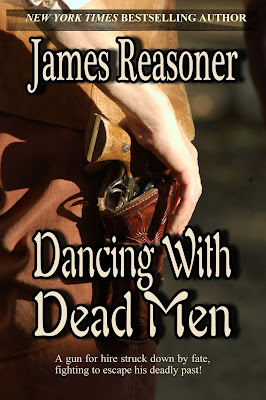 Ed here: James and Livia Reasoner have been good friends of mine for going on thirty years. I'm glad to be posting this celebration of James; 300th novel on the same day as their 35th wedding anniversary. What wonderful writers, both of them, and what wonderful people.

1. Tell us about your current novel or project. My 300th novel, DANCING WITH DEAD MEN, was just released for the various e-book platforms last week, and a trade paperback edition is in the works. This is a stand-alone traditional Western novel about a hired gunman, Logan Handley, who is struck down by a disease that leaves him partially crippled. The story follows his effort to deal with this condition and also to save himself and some new-found friends from an old enemy who is stalking with him. There's plenty of action and what I hope are interesting characters. >

I'm working on one of the many ghost-written novels I've done, which I can't really reveal. I can say that it's a Western, though.

3. What is the greatest pleasure of a writing career?
The best thing for me is that writing has always made it possible for me to spend a lot of time with my family and be there for them whenever they need me. Sometimes it seems like my writing schedule has me chained to the keyboard, but that's not really the case. There's still a great deal of freedom for me to do other things when I need to.

4. The greatest displeasure?
Waiting to get paid! I suspect that's a common answer among writers.

5. Advice to the publishing world?
Realize that the success of e-books has changed things and the business will never again be like it was before.

6. Are there any forgotten writers you’d like to see in print again?
So many of the great pulp and paperback authors are in print again, so it's harder to find truly forgotten writers. Harry Olmsted was a fine author who wrote hundreds of stories for the Western pulps, but he never wrote any novels so his work has disappeared. I'd love to see a collection of his best work. Donald Barr Chidsey was a top-notch historical novelist who also wrote some good mysteries and contemporary fiction. Quite a bit of T.T. Flynn's Western work is available, but he also wrote hardboiled mystery fiction that ought to be reprinted.

7. Tell us about selling your first novel.
In 1979, when I was trying to sell TEXAS WIND, Livia and I lived out in the country (we still do) and hadn't put up a mailbox, so we got our mail at the post office in the little town nearby. Because I was sending out manuscripts all the time and didn't want them bent or rolled up when they came back in their SASE (as they all too often did), we got a drawer at the post office instead of a regular box, so they could lay flat. So for years my address was P.O. Drawer C. The drawers were on the very bottom row in the post office, so I had to bend over to open Drawer C and check it. One day I was doing that when I found a manila envelope in it. That was a common sight, of course (those dreaded SASEs), but I realized right away this wasn't one of mine. Instead the return address was Manor Books in New York, the most recent place I had sent TEXAS WIND. I remember I just stood there for a few seconds looking at the envelope before I took it out, opened it, and found contracts for the book. My pulse was really pounding. I don't even remember the drive home to tell Livia. It was a great moment.

I'm a big fan of his work and I hope to meet him and Livia before I croak.