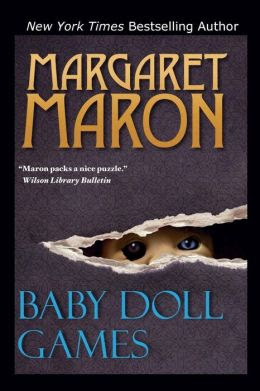 "When a shadowy figure kills a dancer in a Greenwich Village theater before an audience of horrified children, NYPD detective Sigrid Harald is outraged and soon has a gut feeling that passion played a large part in the murder. With no physical evidence, she turns to special dolls used by therapists to help children talk about crimes they've witnessed." -- Good Reads

"This is one of Margaret Maron's most intriguing and elegantly plotted mysteries. Lt.Sigrid Harald at her best." --New Improved Gorman


1. Tell us about your current novel or project.

I just finished re-reading Baby Doll Games, fifth in the Lt. Sigrid Harald series, so that Oconee Spirit Press could reprint it as a trade paperback. Although I don't own a Kindle or Nook, I recognize their portability and their appeal. Nevertheless, I and many of my readers prefer a print-and-paper book and Oconee is doing a lovely job with these. All the early Sigrid Harald books had been out of print for years, but they seemed to find a new audience when I uploaded them as eBooks.  And now my readers who want the print version can have them. Win-win all around. But it was weird to read a book set twenty-five years ago and realize how much the world has changed in those twenty-five years, back when telephones were tethered to the wall and computers were starting to replace typewriters. Still, the old verities remain and the old motives for murder haven't changed all that much, have they?

Four projects are in the works:

1) I'm fine-tuning  DESIGNATED DAUGHTERS, an August 2014 novel with Judge Deborah Knott. My editor's copy edit should show up in my mailbox any day now. Joan
Hess gave me the title, her term for the caregivers who take on the family's dying or invalid member, usually out of love but often out of
duty when no one else will. Designated daughters come in both sexes and may be in-laws, sisters, brothers, nieces, nephews, grandchildren.

2) A  short story for the next MWA anthology. Because it must use Manhattan, I'm making it a Lt. Sigrid Harald story.

3) The next Judge Deborah Knott novel. I'm only at the very, very beginning of plotting it in my head because I want to do flashbacks to
when her parents met and fell in love. I'm curious to know why a respectable small-town debutante type could fall for a disreputable
bootlegger with 8 little motherless boys.

4) Another short story set in 197 AD. The first was a Christmas chapbook titled "Yo Saturnalia!" published by Doug Greene's Crippen and Landru.

Other than the writing itself, when it's going well? I think it has to be the writing friends I've made over the years. It took me a long time to find my tribe, butthey've enriched my life immeasurably.

Well, I must admit that I don't enjoy the letters from disgruntled right-wing readers who take me to task if I let Deborah, who has to run
for office, voice her personal beliefs. They act offended --  as if she has no right to political opinions. I've had several who say they're
going to quit reading my books and will try to keep  their libraries from shelving them. One of them even wrote that she was burning her
copy of Killer Market, in which I mentioned how Ronald Reagan gutted the nation's mental health system.

Absolutely none. The whole industry is in such flux I couldn't begin to predict where things are going to come down.

You mean deceased writers whose books should be reprinted? I can't think of any. That's another good thing about the Internet. Between Alibris and AbeBooks and the Gutenberg Project, we can now find almost every book. But don't we miss new Westlakes? And in the years to come won't we miss new books from Elizabeth Peters and Elmore Leonard?

Selling? That only took a year or so.  It was writing that first novel (One Coffee WIth) that took forever because I didn't think I could
write a real book. I began as a poet (a very bad poet) and progressed to short stories. That's the operative word:  short. My first pass at
what eventually became a book was about 2500 words long. It didn't sell. I doubled it into a magazine-type novelette.  It didn't sell. I
doubled it into what I hoped was a book-type novelette. It didn't sell but I was advised that book-type novelettes are closer to 25,000 words.
So I doubled it again. (Anybody still doing the math here?)  It didn't sell, but it did interest an agent. He liked the characters, he liked
the plot. He even said he liked the writing, "but nobody's buying novelettes.  So if you could double it . . .?"  I went back and
interpolated a long subplot and added lots of adjectives and adverbs to the main plot. It sold.

As for the actual sale, a magazine editor had recommended an agent, who did agree to represent me. It was a dreadful fit. He had absolutely
no feel for what I'd written and sent it around to some of the worst pulp markets. After a year, when all his submissions had been rejected,
we agreed to dissolve the relationship (and that, incidentally, was the last time I ever signed a contract with an agent.) A week later, the
ms. fetched up on a Canadian editor's desk with the last two chapters missing. She wanted to read the ending. This was for Raven House,
Harlequin's abortive attempt at a mystery line. She bought the book and published it for their book club, but the line folded before One Coffee
With made it to the open market, so I was able to take the second book in the series to a new agent, who immediately sold it to Doubleday
Crime Club. Eventually, that editor went back and published the first book. I can't say enough about how ethically Harlequin treated me. They
did not ask for a return of the advance and they immediately reverted all the rights back to me. But it was a huge disappointment to write and
sell a novel that didn't see a bookstore till years later.
Posted by Ed Gorman at 12:58 PM