Fresh Meat: Riders on the Storm by Ed Gorman The Criminal Element

Fresh Meat: Riders on the Storm by Ed Gorman 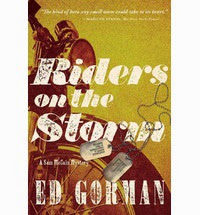 Riders on the Storm by Ed Gorman is the final mystery in the suspenseful and politically charged Sam McCain series set in Iowa during the Vietnam War (available October 8, 2014).
I first met Sam McCain in The Day The Music Died, which is set in 1958, a year I remember well. It was the year I turned twelve, but Sam was that mystery of mysteries—an adult at a time when adults were revered and respected by virtue of their age. Author Ed Gorman captured the atmosphere exactly in his depiction of Sam’s home town, Black River Falls, Iowa. I was immediately captivated and have followed Sam and Black River Falls in each succeeding mystery novel.
Book ten of the series, Riders on the Storm, is set in 1971, a year I also remember well. On a personal note, it was the year my second child was born. For America, it was the year of The Pentagon Papers and the year the Twenty-Sixth Amendment of the Constitution was ratified, lowering the voting age from 21 to 18. It was a year I spent much of my time gathering support to lobby for the release of American POWs being held in North Vietnam. Turbulent times.

Before Riders on the Storm opens we already knew Sam was anticipating his reserve unit being called up. We did not know that he and some friends decided to enlist, and now we first learn that he was in an accident in Boot Camp that nearly took his life. During a lengthy recuperation, Sam receives a Dear John letter from his fiancée and eventually, a discharge from the army. So he wanders home again to Black River Falls where the atmosphere clearly reflects the times.
Sam explains right up front. “The war was not only destroying people overseas, it was destroying them back in my hometown.”
A friend of Sam’s named Will Cullen is having trouble dealing with the memories he has of actions he took while in Vietnam. Sam frequently spends time with Will trying to help him resolve his emotional trauma, but when Will joins an anti-war veterans group, he comes under fire from veterans who disagree with his stance, most notably political up and comer Steve Donovan who give Will a very public physical beating. So when Donovan is murdered, Will Cullen is the most obvious suspect.
Sam doesn’t want to believe it, but the case against Will seems quite strong. Another Vietnam vet calls Sam. The veteran is named Greg Egan and Sam describes him this way:

In some respects he was the conscience of a small group of vets who’d had physical and mental problems in assimilating back home. The wife he’d left behind him when he’d gone to Nam was still behind him. She drove him to the VA three times a week. They were starting the prosthetic process.

With prodding from Greg and from Will’s wife Karen, Sam takes a closer look and discovers political intrigue, clandestine romances and heroin smuggling. But can he prove that any of these things have to do with murder? Still, it is in Sam’s nature to try to help a friend in trouble.
Ed Gorman manages to wind every messy and unruly concern that plagued America in 1971 into one taut story. I have always know that one of the things I love most about the Sam McCain novels is that Gorman grabs a moment in time and doesn’t let go. But now he is letting go. Riders on the Storm is the final entry in the saga of the folks of Black River Falls during a time of great change spanning from the late 1950s to the early 1970s. I have to say that I sniffled more than a little at the thought of never hanging out again with Sam. Then I brightened at the thought of reading the series again from start to finish. Maybe I could make that an annual event—a visit to Black River Falls. And if you have never been there, what are you waiting for? The Sam McCain books are not to be missed. Treat yourself to a trip back in time. As written by Gorman, the Vietnam Era in small town America stands on its own as a time and place not to be missed. Wrap yourself in the mystery and the history of Riders on the Storm.
See more new releases at our Fresh Meat feature page.
To learn more or order a copy, visit:
Posted by Ed Gorman at 7:08 AM

Sad to know this is Sam's final adventure. I have ridden with him through all the others, and will join the final go-round the instant I finish The Caine Mutiny, which I began a week before obtaining Riders on the Storm. And then...Dev Conrad.

Excellent review. I couldn't have put it any better. Fortunately there are the jack Dwyer mysteries to fall back on.