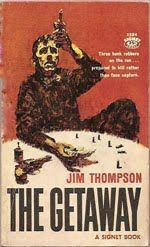 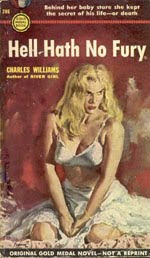 LET'S BOOK 'EM: A SURE-FIRE SURVEY OF BANK ROBBERY NOVELS FROM 'THIS HERE'S A STICK-UP'

Consult this survey of sure-fire bank robbery novels and curl up with a good 211.

"Parker is very popular in prison," wrote 1960s-era bank robber Al Nussbaum. "Despite the fact that almost everyone can find some nit to pick with the criminal methods he describes, the strength of the Parker character overshadows any small flaws." Nussbaum was referring to the hardboiled crime series by Richard Stark (a pseudonym of mystery writer Donald Westlake) featuring a professional heister named Parker—no first name, thankyouverymuch. The Parker novels are crisp, cold, suspenseful—and apparently, inspirational. "I’ve not only read them," wrote Nussbaum, "I’ve even tried to live a couple of them."

Of course, Nussbaum wasn’t your average crime buff—he had a vested interest in the topic. But what might modern-day Nussbaums be reading in the slammer these days?

Blood Money (1927) by Dashiell Hammett. The hero of this short novel—and many other short stories, first published in Black Mask magazine during the 1920s—is a balding, middle aged operative who works for the Continental Detective Agency (think: Pinkerton Agency). In Blood Money—which is actually two related novellas, "The Big Knockover" and "$106,000 Blood Money"—the Continental Op tangles with a criminal mastermind named Popadopalous who organizes an audacious double-bank heist perpetrated by no less than 150 (!) criminals. The $106,000 refers not to the take from the robbery, but rather the bounty on Popadopalous's head. Hammett's seminal hardboiled novel Red Harvest also features a bank robbery as a subplot.

Thieves Like Us (1937) by Edward Anderson. Three escaped convicts resume their careers as bank robbers in Oklahoma, but things become complicated when the youngest bandit, Bowie A. Bowers, falls in love with a cousin of one of the older robbers and decides to make a run at the straight life. Anderson got the idea for the novel after interviewing his cousin Roy Johnson, who was in the Huntsville State Penitentiary for armed robbery; the original title was They’re Thieves Like Us. The novel was later filmed as Nicholas Ray’s They Live By Night (1949) and Robert Altman’s Thieves Like Us (1974), starring Keith Carradine and Shelley Duvall.

Hell Hath No Fury (1953) by Charles Williams. A drifter named Madox wanders into a small town and finds work at a used car lot, but is just biding his time until he can devise the perfect bank robbery by setting diversion fires all over town. But someone’s already set a fire for Madox: the used car lot owner’s wife. In 1990, Hell was turned into a Dennis Hopper-directed movie called The Hot Spot starring Don Johnson (as Madox), and Virginia Madsen (as the boss’s wife, Dolly Harshaw).

The Big Caper (1955) and Steal Big (1960) by Lionel White. White was the king of pulp caper novels—his racetrack robbery thriller, Clean Break, was the basis for Stanley Kubrick's early film noir The Killing. In The Big Caper, White details a complex bank heist, complete with a safecracker, an arsonist, a pair of tough guys, and a phony husband and wife whose job it is to case the bank. But what happens when that couple decides they'd rather live as man and wife for real than pull the bank job? White described another bank heist gone south five years later in Steal Big, where a hardened con named Donovan puts together what he considers the ultimate bank robbing gang—but all of them turn out to be the ultimate collection of sociopathic losers. White has some fun with in-jokes; one Manhattan black market gun dealer operates under the front, "Kubric Novelty Company."

The Getaway (1958) by Jim Thompson. A bank heist perpetrated by a pair of married ex-cons—Doc and Carol McCoy—goes sour, and suddenly a clean getaway is the only thing that matters. Of course, this is a Jim Thompson novel, and in Thompson’s sordid little corner of the universe, nothing is clean or easy. Still, Doc McCoy has a few clever heist techniques up his sleeve. Explains one thug named Rudy early in the novel: "First, [Doc] looks for a bank that ain’t a member of the Federal Reserve System."

"Right," says Rudy. "So anyway, he checks that angle, and then he checks on interest rates. If a bank’s paying little or nothing on savings, y’see, it means they got a lot more dough than they can loan out. So that tips Doc off on the most likely prospects, and all he has to do then is check their statements of condition—you’ve seen them printed in the newspapers, haven’t you?"