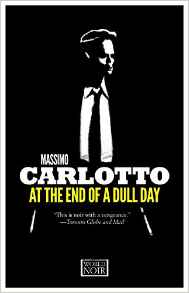 AT THE END OF A DULL DAY by Massimo Carlotto is the kind of tough, take-no-prisoners crime novel that had me falling in love with the genre back when I was a kid reading Spillane, Cain, and Hammett. The anti-hero of this novel, Giorgio Pellegrini, is not a nice man, to put it lightly. He’s at least as ruthless as my own Kyle Nevin, and he might even be more of a sociopath. Earlier in his life, Giorgio had been a criminal and a terrorist, now thanks to his benefactor, the Honorable Counselor Brianese, his record has been scrubbed clean and he owns a popular restaurant in the Veneto region of Italy where Brianese operates in the backroom taking bribes and conducting shady government business. Giorgio might be living a more respectable life now, but he keeps his fingers dirty, operating a small prostitution ring wth his old friend, ex-lover, and partner Nicoletta which he uses to supply Brianese and his political cronies. The way Giorgio disposes of these prostitutes every six months so that they can’t accumulate any secrets that can harm the Honorable Brianese is particularly cruel. But as I said earlier, Giorgio is not a nice man. Even without learning about what he does to these prostitutes, all you have to do is see the way he dominates every aspect of his wife’s life to make her little more than a docile servant to understand that.

So life is good for Giorgio. He’s wealthy, respected, living for him a nice dull life. And then shit happens. Brianese decides to steal two million euros that Giorgio had entrusted with him to invest. When Giorgio leaves Brianese a message by breaking into the Honorable Counselor’s home and disfiguring the maid with brass knuckles, shit really happens. Instead of Brianese taking the intended message--that Giorgio isn’t someone to be messed around with—he now looks at Giorgio as a savage who needs to be removed. And that’s really where the beauty of this novel shows up—as despicable as Giorgio might be, with all the double-crosses that follow, which include being sold out to the mafia, you can’t help but root for Giorgio as he tries to claw his way back to the way things were before Brianese’s initial betrayal.

POSTED BY DAVE ZELTSERMAN AT 11:07 AM