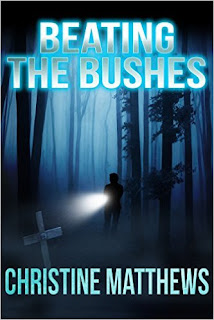 Vincent Lloyd is broken. His six-year old daughter disappeared a few years earlier, and he was the prime suspect. He was suspected by the police and hounded by the media. When a teenage boy named Steven Kracher disappears from the small town of Kimmswick, Missouri, Vincent sees his participation in the search as an atonement for his inability to protect his daughter.

The search is fruitless, and the media, recognizing Vincent, takes a few punches before turning its attention to Steven’s father, Baylor. Vincent and Baylor bond and as the years pass help each other heal, but Baylor, against all reason, is convinced his son is alive. A conviction that turns to hope, but leads to dark conspiracy.

Beating the Bushes is smoothly told with multiple perspectives—some in first and others in third—in an unrushed style. Its storyline is provocative in its depiction of the relationship between the media, ratings based television news sensationalism, and those left behind after the disappearance of a child. The initial sympathy turning quickly to insinuation and ultimately accusation. The characters are complicated and believable, and the relationship between Vincent and Baylor has a subtle depth.

The plot develops unexpectedly. It twists away from the expected in interesting and satisfying ways. It is less mystery and more thriller with a stylish grittiness—

“Rain, heat and claustrophobic humidity. While my feet swell, my boots shrink, and as much as I want to put on the dark glasses in my pocket when the migraines come, I don’t for fear of missing something. Something important.”

It viscerally depicts the sadness if losing a child, and preys on the fear of a parent. The possibility. The horror. Beating the Bushes is my first experience with the work of Christine Matthews, but it will definitely not be the last.