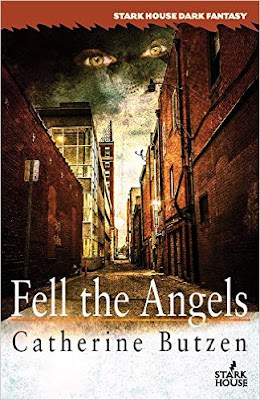 Stark House Press introduced the Fell the Angels characters in Catherine Butzen’s first novel, Thief of Midnight, back in 2010. The main character, Abby Marquise, works in Chicago for the Society for the Security of Reality, keeping the world area safe from the nefarious plots of such mythical creatures as boogymen, werewolves, ghouls and faeries.

In Thief of Midnight, there is a plot by the bogeymen--their existence threatened by dying belief--to kidnap children and create a reign of terror. In Fell the Angels, Abby and her group have to deal with a group of rogue selkies who are in league with a group of power-hungry faeries.
Reviews for Thief of Midnight include this from Publishers Weekly: “Butzen's strong debut livens up some common urban fantasy tropes with witty dialogue and fun monsters.”

Her new fantasy mystery is darker—and even stronger.

In fact, Fell the Angels just received a PW review in late October, in which the reviewer had this to say: "Butzen keeps the action moving quickly, with plenty of fights distracting Abby and John from their search for the killer, but also tosses in some delightfully grim humor... fans of the formula will enjoy the ride."