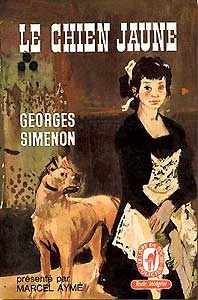 The early Maigret detective novels by Georges Simenon bear the stamp of the busy pulp writer Simenon he was before finding his voice and mission with the cranky even surly Commissaire.

In the Yellow Dog, a particularly well-plotted crime novel, Maigret travels to the small coastal town of Concarneau where a local wine merchant has been murdered under mysterious circumstances. According to a witness the man was strolling home on a windy night and paused to walk up steps leading to the narrow sheltered porch of a long empty house. Moments later the man fell backwards, dead from the shots.

Once there Maigret meets the four men and one waitress who seem to know much more than they're willing to share with him. He also sees a large yellow dog that keeps appearing at the crime scenes to come. Maigret feels a kinship with the animal which is more than he can say for anybody he meets in the town.

Where did the dog come from? Why does he keep showing up at such odd moments? Does he belong to the person who by book's end kills more people?

This is a serial killer novel. Simenon even casts the local newspaper as one of the villains. The editor has a history of exploiting bad news to the point of making each local tragedy worse. And the killings are no exception. Simenon suggests that it is sop for Frenchmen to a) have mistresses and b) go about armed. Both are factors in the investigation.

Most of the elements of classic Maigret are here. The weather is as vivid as the characters; Simenon buttresses his sociological look at French life with bleak humor; and his pity for decent people life has treated badly borders on the religious along with his contempt for pomposity and self-importance and cruelty.

There is always a claustrophobic feel to the Maigrets; this allows the reader to experience what the Inspector himself does. As a forlorn chronicler of humankind Simenon is still without peer.

I have many Maigret novels, but not this me. I'll look for it!