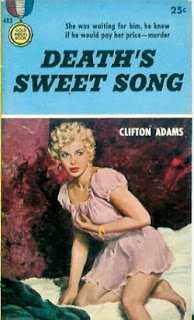 "It was in the streets of Palamera that Gunner Flagg lost interest in bank robbing as a profession."

Clifton Adams was a jazz musician who wrote westerns of a high order in the Fifties and Sixties. Donald Westlake has talked about how much he admired Adams' The Desperado when it first appeared from Gold Medal back in the Fifties. And numerous other writers of both crime and western have talked about his influence on them.

I like Adams because his bad guys have always struck me as real card-carrying members of the criminal class. They aren't mythic. They just want money or sex and power. When you read James Reasoner's fine Draw: The Greatest Gunfighters of The American West you soon see what a joke the mythic west is. The criminal class, whether high or low, has always been the same in just about every historical context. I'm sure that street gangs controlled parts of ancient Rome and we have only to look at early New Orleans and Boston to see that various forms of gunfighters roamed the streets and killed a whole lot of peope.

Adams wrote a lot of books and as result some were better than others. I'm partial to A Partnership With Death. I once said that David Goodis didn't write novels, he wrote suicide notes. I could say the same about Partnership. Another, Hot Town, is a Hammett-like noir that could have appeared in the early years of Black Mask when they ran hardboiled westerns. One hard mutha of a narrator telling one mutha of a tale of crooked politcians in the old west. You have only to look at the oil indstry today to see that this bunch is still doing well. The Most Dangerous Profession is a western crime story about a drifter signing on to guide four easterners on a hunting trip. Good grim stuff.

He wrote, that I've been able to figure out, four Gold Medal crime novels and all of them are excellent. Vintage Hardboiled Reads reviewed Death's Sweet Song awhile back and had this to say:

"Joe Hooper owns a fled-bag motel in Oklahoma and is about to go under. Along pulls up Karl Sheldon, with his beautiful young wife Paula. Hooper is desperate for extra cash and Shelden, with sexy Paula's help, wheels him into a payroll robbery. Things go wrong, deadly wrong....

"This may be the best crime fiction novel that Gold Medal published in the 50s. It's a story of how things can spiral out of control once you take that step-and you can't go back. Joe Hooper is a character the reader cares for, even as he goes bad. You feel the weight and burden he carries, which slowly drags him deeper and deeper until the end; where he decides his own fate. Adams builds on the relationship between Hopper and his father in the story. Hooper struggles knowing he is disappointing his father through his actions and this compounds his inner torment. Hooper sweats it out throughout the novel and we are right there with him.

He also wrote a pair of Ace crime novels as Johnathan Gant (paired with other writers in Double Book form) and at least one soft core novel.

Like most writers, he had at least one obsession and in his case it was the relationship between fathers and sons. On several occasions he had the ability to hurt you with his observations on that theme.

Another GREAT post!
But these posts are the reason my to-be-read pile is looking something like the leaning tower of Pisa!
TWB

Another GREAT post!
But these posts are the reason my ToBeRead pile looks like the leaning tower of Pisa!