NO EASY ANSWERS by Carolyn Hart 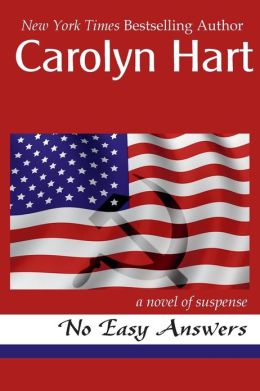 No Easy Answers is another first-rate early Carolyn Hart novel from the fine folks at the Oconee Spirit Press.

For my generation there was no more bitter a historical time than the years of the Viet Nam war after 1965. For the majority of people you were for or against. There were excesses on both sides. The anti-war people burned the ROTC building in Iowa City while I lived there. The Chicago cops turned demonstrations into blood baths. If you were anti you were a Commie and if you were pro you were a war monger. Vice President Agnew, in between taking bribes in the VP's office, decreed that some protestors should be deported.

Carolyn Hart did the impossible, wrote a riveting domestic espionage novel set in America during these angry years--and let both sides have their say.

Draft-age Bart Hastings, who has begun to doubt the necessity of the war, must  help his father, a military man after the Colonel who is suddenly and suspiciously accused ,selling secrets to the enemy.  Hart's skills are all on display here. As these early novels prove she has a great affection for spy and espionage fiction.  False leads, cliff hangers, shadowy figures, Hart keeps you turning pages while reflecting soberly but unobtrusively on the war itself.

I read this in two quick sittings and enjoyedy every word of it.
Posted by Ed Gorman at 3:18 PM

This looks wonderful!! I'm so glad you alerted us to this Carolyn Hart release. I love books set in this time period and am looking forward to reading it.