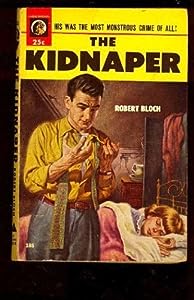 In a certain way the narrator of The Postman Rings Twice has always struck me as deserving of a slot on the Olbermann show. Of course he went a little beyond being stupid. He killed somebody.

What Bloch has done is write a journal authored by one of these people, in this case an arrogant murderous drifter who constantly calls attention to his own supposed genius. He latches on to a nineteen-year-old maid who falls so blindly in love with him that she reulctantly agrees to help him kidnap her charge, the four-year-old daughter of a very decent wealthy couple.

The book worked on me in two serious ways. It made me examine my own class anger, number one. The slickie who tells this story believes that he has the right to hurt anyone who has more than he does. Two or three times he makes a passionate case for this. I remembered that in the sixties when an ROTC building was torched by demonstrators in Iowa City how sickened I was by the jubiliation the street. Rich or poor doesn't make any difference. Pigs is pigs. I grew up in a union family and generally agreed that American workers were exploited (if only we could have seen then just how exploited they would be a few decades later). But as always there were a few guys who had to push too far, never understanding that they were in the process of becoming very much like their enemy and the rent-a-cops who bullied them on the picket lines.

Number two is the realism of its setting, especially the first act which involves the narrator working in a factory and heading out for taverns after work. Bloch gets it down just right, a slice of Brit Kitchen Sink drama (Sunday Night and Sunday Morning told but told by a sociopathic murderer) before the Brits caught on to it.

The plot goes over the top a few times, yes, but somehow that only enhances the delusionary tone of the killer. He is a superior being therefore his entire life is over the top. No mere mortal can claim that.

I see so many crime stories on the tube that push me to wishing I was in favor of capital punishment. Some asshole marches six employees into the back of a supermarket and kills them for less than a grand? Or a wife and her tattoo sleazy boyfriend murder her husband for twenty grand's worth of insurance? Or a suburban Chicago cops kills (allegedly of course) two maybe three wives and peddles his ass on every show that will have him, grinning ghoul every time out?

Somehow all these rotten bastards are in this memoir of a really terrifying guy. No serial killer antics. No booga-bogga. Just hard core pure one hundred per cent evil.

And that's just what Robert Bloch got down in this masterful little novel.

Bloch considered this one of his best.