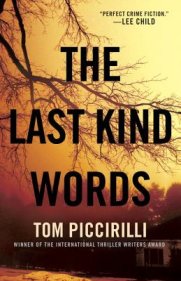 EG: Your new novel, due out July 7, from Bantam is a continuation of THE LAST KIND WORD, now out in trade paperback.  Both follow the adventures of a family of professional thieves, and the son, Terrier, who managed to extricate himself only to be drawn back into the family business, family secrets, and other matters of vengeance and violence.  The relationship between Terry and his brother Collie, who was on death row for a series of spree killings, was the lynchpin of the first novel.  How were you able to pull the other family members into greater focus with this book?

TP: The other family relationships were carved out in LKW but fell into the background because of the main theme of Terrier trying to save and/or forgive Collie.  This time out I was able to give greater in-depth storylines to Terry's parents, his younger sister Dale, and other members.
EG: You're currently working on your third Terrier Rand novel.  Will the series be a trilogy or do you intend to continue on?
TP: I suppose that will depend on what happens at the end of the new book.  I can't think too far beyond one novel at a time .  But if I have more story to tell after this one, then sure it will continue until I'm done telling my tale.  If people keep wanting them, I'll keep providing them.
EG: Why are you so mean to Terrier and his family?  You really kick the crap out of them, especially emotionally.
TP: They're noir heroes, they have to get the shit kicked out of them.  They've all got a date with fate.
EG: Is there any redemption for Terrier?
TP: I think there is.  It's doled out bit by bit across the books.  There's no big saving grace moment, but lots of little circumstances where he finds forgiveness for others and himself.
EG: This is your first crime series.  What are you able to do with the Rand family that you couldn't with your other standalone novels?
TP: A series allows you to go back to the same well and keep mining it more deeply for hidden corners of your protagonist's personality.  I wanted to marry a mystery with a family drama and that's what I've done.  It's not just Terrier in the spotlight but everyone gets to take the stage eventually.  The whole play unfolds to strengthen the themes and twists.
EG: Thanks, Tom!
TP: Thank you, Ed!
Posted by Ed Gorman at 1:55 PM

The first book was fantastic. I'm looking forward to this one!