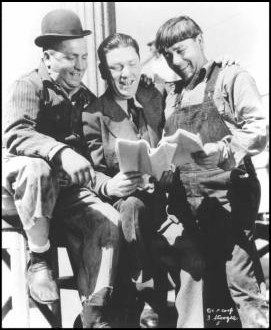 A Word to Lonely People from Mark Evanier

If you ever want to get a lot of e-mail and you don't care how angry some of its senders are at you, tell the world that you like Shemp more than Curly.

Ed here: Mark Evanier is a writer and producer of so many TV shows, animated series and books my arm would go numb cititing them here. He has a great show biz sometimes political blog called News From Me, well worth checking out.
I've had the same experience Mark has. Prepare to run when you tell certain people that you prefer Shemp to Curly. (Maybe the United Nations could get involved.) It's not that I don't appreciate Curly and his antics, I do. But Shemp's face shows the pain and humiliation that the Stooges endure.
Shemp, to quote my friend Max Collins, is the only one of the Stooges who seems dimly aware that life shouldn't be like this and thus is the most interesting character. Also to me the second most dimly aware is poor Larry. He seems to understand that Moe's solutions to their problems are almost always crazy. But he's goes along out of fear. Now I suppose I'LLL get letters. :)
posted by Ed Gorman @ 12:48 PM

My late friend Bruce Peters, guitarist with both Daybreakers and Crusin' (my two bands), said as early as the late sixties that Shemp was the superior stooge because "he's the most pitiful." Bruce later expanded/expounded on this, and I agree whole-heartedly: "Shemp is only stooge who is smart enough to realize he's a stooge, but not smart enough to do anything about it." That's tragedy. And that's comedy. At their best.

Too much analyzing. I prefer Curly because he's hilarious. End of discussion, I respectfully submit.

Damn it, this post got me involved in another argument with my wife about the stooges. She hates them and I love them. As has been mentioned before, most women seem to dislike them, I guess because of the violence and the way they look.

I like them though and I think I'll even try to look and dress like them, that will really annoy her...

OMG, so funny. It has been a running joke of mine for years that this is the only combination of words never before uttered in the history of the English language:
"OH DARN, THIS ONE IS WITH CURLEY; I WAS HOPING IT WOULD BE WITH SHEMP."

Guess I was wrong. But seriously, I've never heard of anyone preferring Shemp---fine comedian but his younger brother was THE Stooge.