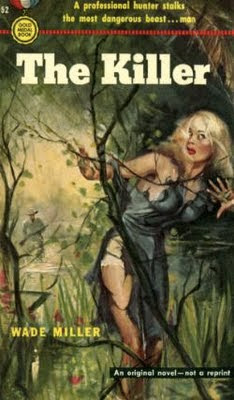 
Wade Miller was of course Bob Wade and Bill Miller. They collaborated on a few dozen novels until Miller died of a heart attack in the office they shared. He was forty-one.

Much of their best work was done for Gold Medal. The Killer is a fine example. A rich man named Stennis owns a number of banks. His son works in one of them. During a robbery his son is killed. Stennis hires a big game hunter named Farrow to find the notorious bank robber Clel Bocock and his gang. When Farrow locates them he is to call Stennis who wants to be there to watch them die. Farrow is a unique character and not just because of the big game angle. He's middle-aged and feeling it, something rare in that era of crime fiction.

The search for Stennis--and the love story that involves Bocock's wife--takes Farrow from the swamps to Iowa (including, yes, Cedar Rapids) to Wisconsin to Colorado. The place description is extraordinary. Probably too much for today's readers but the Miller books are filled with strong cunning writing. Same for twists and turns. For the length of the first act you can never be sure who anybody is. They're all traveling under assumed names and with shadowy motives. The only thing that binds them is Clel Bocock.

For anybody who thinks that Gold Medals were largely routine crime stories, this is the noel you should pick up. Stark House published this a few years back (still available) along with Devil On Two Sticks, one of the most original mob novels I've ever read. There's also an excellent David Laurence Wilson introduction on the careers of the two writers.

Wade Miller got lost in the shuffle of bringing back the writers of the fifties and sixties. This book, so strong on character and place and plot turns, will demonstrate why more of their books should be in print.
Posted by Ed Gorman at 1:51 PM

The Killer is an excellent little novel, but I don't think Wade Miller's first book for Gold Medal, Devil May Care, gets anywhere near enough recognition.

That book floored me the first time I read it. A wild combination of high and low influences with a seriously satisfying climax.
Kind of like what I'd expect if Ernest Hemingway wrote a novel for Spicy Adventure. If that translates.

I've only read on Wade Miller book, The Big Guy, but had very much the same reaction to it as you did to The Killer. A surpisingly complex and enjoyable read. I will definitely keep my eyes open for the Killer.

This sounds good. I'm unfamiliar with the author, but I'll keep an eye out when I dig through old paperbacks.