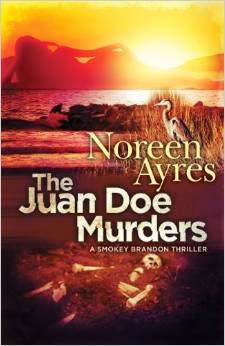 http://www.amazon.com/The-Juan-Doe-Murders-Thriller/dp/1941298249
1. Tell us about your book / books that Brash is publishing.
While living in Southern California I read about murders of “nameless” undocumented aliens. Putting immigration politics aside, just think of the word alien. No: it’s human. Maybe we should ban that word alien, unless it relates to outer space. “THE JUAN DOE MURDERS” tracks the nefarious underworld that sometimes snares people who merely want to find work to support themselves and their families. The conflict takes place in an affluent community near a prestigious university, a heartless hallway-shouldering we wouldn’t expect.

2. Can you give a sense of what you're working on now?
I’m reviving a suspense novel following a kid railroaded into 30 months in prison for stealing a front-loader in the Arizona desert. The friend he did it with on a lark is now a deputy who keeps complicating his life. Then a desert-rat bounty hunter gets the kid in more trouble when he asks him to set lights for a runway where a private plane is coming in. The kid doesn’t know the payload is marijuana and bad guys are waiting to rip it off. When I first wrote this manuscript I was advised that drug stories were old-hat, no one would publish it. So I put it aside for 20 years. Today I may only have to change the load of weed to heroin and meth!

3. What is the greatest pleasure of a writing career?
I’m a bit of a quiet person, so I suppose for me writing is a way of shouting. Readers are friends I want to share pleasant things with in a more focused way, as we would on a walk or before we posted endless pictures of flowers, food, pets, and vacations on Facebook. But I also have this extravagant idea that I can bring attention to injustice, and sympathy for people whose careers confront the most unattractive deeds of mankind. “Don’t you SEE this body here?  It used to be a person who had dreams and cute habits and a history and kids and a grandparent the person wanted to take care of, and now some vermin did him in. Let’s go get the piece of dirt and make him (or her) pay.”  It doesn’t matter if the story is fiction. Fiction represents the world in its conflicts, tightened for comprehension.

4. What is the greatest DISpleasure?
Promotion, promotion, promotion. I don’t like talking about my books. The first time I gave a talk, a woman came up afterward and told me I never gave the name of my book! Well, shame on me. Not to is ingratitude. What I do enjoy is having a platform to encourage other people’s aspirations. I’m likely to have an audience of aspiring writers, sure. But even if there’s someone in the audience dragged there by a writer friend, and that guest wants to create a fifty-foot needlepoint art piece of a tank of tulips instead of a book but isn’t sure it’s worth it or if anyone would love it, I want to encourage that person’s need for expression. I particularly like speaking to groups of people who are just now coming free of careers that ate up all their time and they wonder if they should start.

5. If you have one piece of advice for the publishing world, what is it?
Spot that beauty in the crowd who doesn’t wear sequins. Other than that, I won’t presume. The business side of publishing is complex. I frankly wouldn’t want to be in those shoes.
Advertise outside of genre.  Brainstorm with staff as to where ads could be placed, such as in the magazine Poets & Writers, or in conference pamphlets and what I call Missouri catalogs: those catalogs that were known to be a fit for isolated farmers’ wives to sell them kitschy doodads you don’t need, like LTD Commodities

6. Are there two or three forgotten mystery writers you'd like to see in print again?
JOHN STRALEY, who writes the most beautiful, lyrical prose while having his sleuth do his job in Alaska.
LES ROBERTS, who gives us masterful pictorials through the medium of words while his sleuths cover scenes in Cleveland and L.A.

7. Tell us about selling your first novel. Most writers never forget that moment.
You are sure right about that!  I had read maybe two handfuls of mysteries either written by my writing group friends or because of their recommendations, when I started my novel that pretty much sold to an editor based on 30 pages at a writer’s conference (Squaw Valley). I told him I had another 70 pages written; he asked me to send them on. Based on that, he went to his boss and got the go-ahead to offer a contract to an unknown author who hadn’t even finished the book. An incredible agent who was also at the conference got me a big advance. Were they mistaken?  I’ll never know.