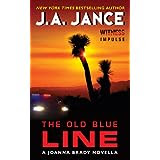 Butch Dixon has been taken for a ride …
Not a jump in the car, see the sights kind of ride. He's been taken for everything he has. He's lost his house, his restaurant business, his savings, his car, his best friend, his faith—all to his conniving ex-wife. But that was seven years ago. He picked himself up, left Chicago, and started over in Peoria, Arizona, running the Roundhouse Bar and Grill. He doesn't look back on those bad years; there's no point. Not until two curious cops show up at the Roundhouse.
Faith, Butch's ex-wife, has been murdered, and the evidence points to him. Stunned, Butch quickly realizes that the black-hearted woman is going to ruin him again, from her grave. Lucky for Butch, the Old Blue Line, a group of retired—but still sharp and tenacious—former legal and law enforcement coots, have taken it upon themselves, as a favor, to make sure he doesn't cross that thin line. After the dust settles, Butch's life is again upended—when a little red-haired ball of fire, Sheriff Joanna Brady, takes a seat at his bar.

1. Tell us about your current novel/collection.
JAJ:  The Old Blue Line came about due to a conversation with a fan who wanted to know what Butch Dixon is writing.  A few days later, someone who had suffered a painful breakup asked if I could write a book that knocked off his ex.  In a matter of days, Old Blue was leaking out through my fingertips onto my keyboard.
2. Can you give a sense of what you're working on now?
JAJ:  I’m finishing the next Ali Reynolds book and getting ready to go on a book tour for the next Joanna Brady book, Remains of Innocence, due out July 22.
3. What is the greatest pleasure of a writing career?
JAJ:  My commute:  From the bedroom, to the coffee pot, to my writing chair.  No traffic.
4. What is the greatest Displeasure?
JAJ:  Can’t think of any.
5. If you have one piece of advice for the publishing world, what is it?
JAJ:  Don’t give up and don’t listen to the people who say it’ll never happen.
6. Are there two or three forgotten mystery writers you'd like to see in print again?
JAJ:  I’d like to reread the OLD Carolyn Keene books—the one with the red roadster.
7. Tell us about selling your first novel. Most writers never forget that moment.
JAJ:  My agent called and said they would buy Until Proven Guilty as long as it could be the first in a series.  That phone call meant my first two books were sold and only one was written.  My next call was to the school principal, Ed James.  He called my kids down to the office to tell them the news.
Posted by Ed Gorman at 12:32 PM