Nothing Is Impossible by Ed Hoch 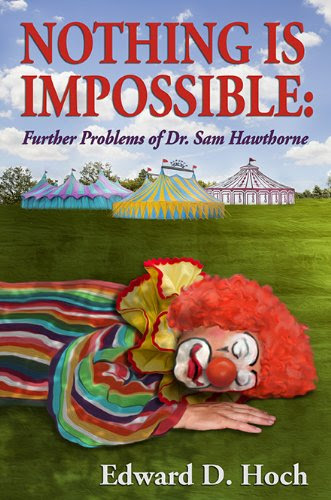 Crippen & Landru has long published one of the most  memorable lines of short story collections by past and present mystery writers alike. The covers are always catchy and the introductions easy to read and informative.
In this case, Janet Hutchings, that most excellent editor of Ellery Queen Mystery Magazine, tells us not only about the fifteen "impossible crime" stories awaiting us but also about the amazing Ed Hoch himself.
I've been a full time free lance writer for something over a quarter century and I can tell you first-hand how difficult it is to make a living this way. Lots of ups and down. You have great years financially and you have not so great years (as in thinking of becoming a TV minister). This is the life of a full time writer of novels.
To make a living writing short stories...certainly not even Ed Hoch could make this "impossible" life possible. But he did. He supported himself for decades writing almost nothing but short stories (yes, there were a few novels) and what stories they were.
Not only did he work in every sub-genre of crime fiction; he invented a few sub-genres himself.
I once had the pleasure of editing a collection of his private eye stories.  He dazzled at that form just as he dazzled with whodunits, howdunits, whydunits, hard boiled, medium boiled and cozies.
Not to mention locked room and other impossible crimes. The easy comparison is with John Dickson Carr and his "impossible" tales. But great as Carr was he didn't have Ed's range or, believe it or not, ingenuity.
Consider the stories here:


Dr. Sam Hawthorne, a New England country doctor in the first half of the twentieth century, was constantly faced by murders in locked rooms and impossible disappearances. Nothing Is Impossible contains fifteen of Dr. Sams most extraordinary cases solved between 1932 and 1936, including a circus acrobat who vanishes from a trapeze; an invisible weapon; murder in a cabin surrounded by unmarked snow; murder in a locked house surrounded by an electrified fence; the attack on a ventriloquist's dummy; a haunted teepee; the vanishing of a teenage girl from her blue bicycle; and eight other ingenious problems for Dr. Sam.
I've been reading these as my bedtime stories and they're perfect. They take you to a world that isn't but ought to be--the world of those great old radio shows and those great old B movies.
Ed Hoch could do it all and this fine collection proves it.