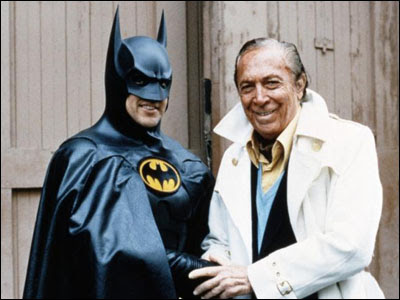 Ed here: This piece illustrates why I'm such a loyal reader of Mark Evanier's News From ME.. Check out his bio--he's literally done it all. For the whole piece go here. http://www.newsfromme.com/2014/06/28/real-dynamic-duo-kane-finger/

There is much talk on the Internet about the announcement that some time next year, Bob Kane will receive a star on the Hollywood Walk of Fame. I mentioned it here and joked that protestors would show up for the ceremony with signs that said "WHAT ABOUT BILL FINGER?" Apparently, some folks are talking about actually organizing something of the sort. I'm thinking I may even go out and join them.
For those who don't know: Bill Finger wrote the first Batman story and most of the early ones that established key things about the character and his world. He was a friend of Kane's and a very good writer, and while Kane argued with some accounts of exactly what Finger had invented, even Bob had to admit that Bill made a vital contribution to the property.
In Kane's 1990 autobiography, he stunned many with the following paragraph. The book, like most of the "Bob Kane" art in the comics, was largely the work of someone else. Still, Bob wanted this in there so it's as good as if he'd typed the words himself…

Now that my long-time friend and collaborator is gone, I must admit that Bill never received the fame and recognition he deserved. He was an unsung hero. I often tell my wife, if I could go back fifteen years, before he died, I would like to say "I'll put your name on it now. You deserve it."

But Kane did not do this and I really wish he had. He could have picked up the phone, called Paul Levitz or someone at DC and said, "Look, as long as it doesn't impact how much I'm paid, I'd like to add Bill's name wherever mine appears." If he had, Finger's friends and family would not have to deal with this injustice.

I'm surprised the lawyers didn't jump on this like flies on a meadow muffin.