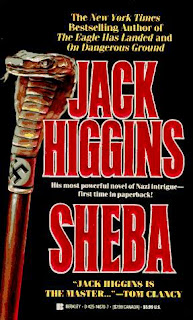 From Gravetapping by Ben Boulden

SHEBA by Jack Higgins (Harry Patterson)
Posted: 05 Jun 2014 04:14 PM PDT
Sheba is a revised edition of Harry Patterson’s ninth published novel, Seven Pillars to Hell. Pillars was released as a hardcover by Abelard-Schuman in 1963 as by Hugh Marlowe, and Sheba was released as a paperback original in 1994 as by Jack Higgins. Sheba is an example of what Harry Patterson does very well—a linear adventure set in an exotic landscape with a likable protagonist and sinister antagonists.
It is 1939. Gavin Kane is a former archaeologist turned smuggler. He operates a launch from the small port of Dahrein, a fictional place that is likely somewhere in real world Yemen, on the Arabian Peninsula. Kane’s professional interest and greed is piqued when he is approached by an alluring woman with a tale. Her husband is a lecturer of archaeology, and he disappeared after coming to Arabia searching for the Temple of Sheba. The temple is believed to be in Rub’ Al Khali, The Empty Quarter, which is a no man’s land filled with criminals and wanderers. She offers Kane $5,000 in advance, and another $5,000 when her husband is found, and he will earn every penny.
Shebais a smoothly told adventure yarn. The plot is linear and clever. There are no dangling devices, and one scene leads exactly to the next. The prose is vintage Harry Patterson: stark, succinct, and, in places, eloquent. Everything works, but the setting really shines. The heat and dust and thirst are palpable. An early paragraph describing the harbor is particularly nice—
“The Catalina swung in across the town and splashed into the waters of the harbor. Beyond it a freighter moved slowly across the horizon toward the Indian Ocean, and three dhows in formation swooped in toward the harbor like great birds.”
Sheba has the feel of the Indiana Jones movies. It includes a Nazi plot device, archaeology, and a bunch of action. There are damsels in distress, traitors, and very bad guys.
I haven’t read Seven Pillars to Hell and I consciously attempted to identify both the new and the old (or what seemed to be the new and the old) in Sheba. The new: the Nazi plot—including Admiral Canaris of Abwehr and a battle injured officer named Captain Hans Ritter who is suspiciously similar to The Eagle Has Landed’s Oberst Radl—was likely added to the original story. The old: Everything else. It is plotted much like many of Mr Patterson's early work, including Sad Wind from the Sea and The Khufra Run.
Interestingly, Kane refers to Dehrain as “Arabia Felix,” which is a Latin term used by the Romans to describe the southwest corner of the Arabian Peninsula. “Felix” is translated as “happy”.

I like the old Patterson books much better than the last ten years of Higgins.

Me too. I think his prime was between EAST OF DESOLATION and THE EAGLE HAS LANDED.