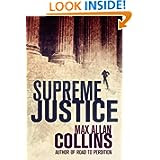 for the rest go here:
http://www.maxallancollins.com/blog/

June 10th, 2014 by Max Allan Collins
SUPREME JUSTICE continues to ride high on the Kindle bestseller charts. I am under no delusions about this – it’s a book a lot of readers are getting free this month, but it still feels good to have a #1 bestseller and to have so many new readers exposed to my work. (I should say “our” work because Matt Clemens was my co-conspirator on this one.)
The Amazon reviews are pushing 150 at this point. Keep in mind that the recent Heller novels are lucky to get over 30 reviews (hint hint), and Quarry novels often stall out in the mid-teens. SEDUCTION OF THE INNOCENT has been sitting at 14 Amazon reviews for some time now, and even TRUE DETECTIVE – which also hit #1 on Kindle when it came out a couple of years ago – has yet to break 100, even with the fresh sales from confused readers who think it’s the HBO show’s source (some revenge, anyway).
What’s most interesting about the reviews is the continuing debate over the book’s supposed liberal bias. There continue to be far right readers who give the book a one star rating without having read it – they’ve just heard the book is a liberal screed, or have been misled by the Amazon write-up, which rather overstates that aspect of the book. Others do read the book, or some of it, but are offended by what they see as a caricature of Clarence Thomas. This is of course odd, since Clarence Thomas is a caricature….
On the other hand, a growing number of conservatives who have read the book seem to like it. Some continue to find more liberal bias than I think is in there, but I may be too close to see it. (Note the Clarence Thomas crack above.) But I am grateful when these readers express themselves honestly and react to the book and not what they’ve heard or assume about it.
I’ve done some limited commenting on reviews, and had an extended, civil exchange with one reader who claimed I’d called conservatives “Nazis.” I pointed out that the word appeared nowhere in the novel. He said I’d used “fascists” and that that was the same thing. I said it wasn’t, no more than “Commie” and “socialist” were the same thing, and so on. The back and forth was respectful and even illuminating. And I tried to make the point that I didn’t call anybody anything – one of my characters did.