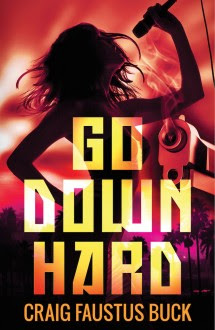 Go Down Hard is a noir romp from the POV of Nob Brown, an ex-cop turned bottom-feeding tabloid crime writer who investigates the 20-year old unsolved murder of a rock and roll goddess who was the headliner in his adolescent sexual fantasies. When he looks under the wrong rock, he inadvertently triggers the murder of one of the rock star's daughters. Nob and his best friend (with benefits) LAPD Detective Gloria Lopes must dumpster-dive into the murky worlds of '90s rock, live Internet porn, Russian mobsters, abusive psychiatrists and estate planning to uncover the sordid ties that bind the two murders together. I had a total blast writing this novel and I hope it shows.

Nob is the narrator of Go Down Hard. It's sequel Go Down Screaming, which I'm about 80,000 words into,  is told from Gloria's perspective and is more of a thriller than a mystery, as she goes mano a mano with a female serial killer who collects souvenir eyeballs. When Gloria and Nob were LAPD cadets, they were having wild sex in a motel when someone screamed in the room next door. Gloria wound up catching the "Party Girl Slasher," call girl Billie Breech, who'd already racked up four victims by the ripe old age of sixteen. Almost two decades later, Billie gets out of the penitentiary having spent her entire prison life planning a particularly demented revenge against Gloria. Scary, sexy, tear-jerking, revolting and funny if all goes according to plan.

Perhaps the greatest pleasure of a writing career is having written. There's no satisfaction quite like typing "The End," except, maybe, getting an acceptance letter, publishing offer or green light. Putting the sense of accomplishment aside, there are moments in writing when something unexpectedly clicks in, especially following a period of frustration (i.e., writer's block), when you feel work come together. These rare feel-like-dancing endorphin floods are hard to beat.

The endless loop of extended writer's block. Unlike the gastrointestinal version of blockage, writers block responds to neither drugs nor surgery. The only cure is to bang your head against the wall until one or the other of them breaks. Persistence does work, but it can get ugly.

Brash Books has pretty much taken care of this problem for me.

I'd received a string of rave rejections from mainstream publishers who were allegedly anxious to see my next book yet passed on Go Down Hard despite professing to love it. These were long, adoring, personal rejection letters from big time editors and publishers. So when Lee Goldberg and Joel Goldman called to tell me they both loved my book I was waiting for the other shoe to drop. Instead, they said they wanted to publish it. I was ecstatic, especially because they seemed so enthusiastic, something I wouldn't expece from a traditional publisher. I didn't know Joel at the time, but I'd socialized with Lee at various writers conferences and both liked and respected him. I also relished the idea of a publishing company run by authors. My agent was a bit wary, primarily because Brash was challenging the traditional publishing paradigm in ways that had not been tested before. We were swimming in uncharted waters and still are. But I'd much rather take a chance on the future than depend on an old business model that's clearly dying if it's not dead already.

BIO
Author/screenwriter Craig Faustus Buck's debut noir mystery novel, GO DOWN HARD, was published by Brash Books in 2015. His short story "Honeymoon Sweet" is currently nominated for both Anthony and Macavity Awards. He is SoCal chapter President of Mystery Writers of America. CraigFaustusBuck.com
Thanks,

Wow!!! If you got a thumbs up from Lee Goldberg and Joel, then it must be good! I still love reading my Top Suspense short stories so I will look forward to this one!

Thanks, Ginger. I hope you have as much fun reading it as I had writing it.

And a huge thanks Ed for allowing me to invade your space.

I have enjoyed visiting and browsing through your fine blog, and I've found plenty of good ideas for my "must read" list. Now, though, may I be bold enough to change the subject and invite you to visit my blog? I am a retired federal government court reporter and paralegal, and I am an avid reader and reviewer of crime, detective, mystery, espionage, and historical fiction; the new edition of my blog, "Crimes in the Library," is where you will able to find regularly posted book reviews and commentary. Here is the address: http://crimesinthelibrary.blogspot.com/ I hope you will stop by and comment often. Thanks, Harper

Hi Harper. I suspect your comment was meant for Ed, but I just cruised your blog and liked it very much. If you'd be interested in reviewing Go Down Hard, Brash just reopened it on NetGalley for their Summer Reading list, so you can get a free copy there.