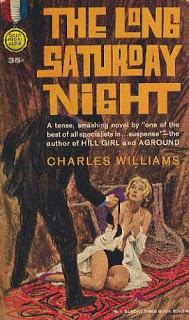 Over what was essentially a quarter century career Charles Williams worked in various sub-genres of the suspense field. He came to prominence writing the small-town Southern crime novel and I always had the feeling that that was his favorite form. But he did adventure novels, sea novels, comic novels and his version of caper novels as well.

The Long Saturday Night rarely gets mentioned when the discussion turns to Williams and I've never understood why. This is a sleek and fevered man on the run novel that also incorporates another Williams acidic take on small town society.

John Warren is typical of the Williams Man. He is angry, even sullen much of the time because of a wandering wife he loves far too much. Also like the typical Williams protagonist he laments the past. He was a college football player whose career was stopped by an accident. He's atypical Williams in that he is a successful businessman, not a car salesman bored with life and up for anything if the sex is good.

Warren is a hunter. As the book opens he is returning to his office from an early morning session in a duck blind. A useless session. Though he heard two shots coming from another blind, he just assumed somebody had had better luck than his own. Turns out though that the shots were cover for a murder--and the dead man was a guy who would soon be identified as a man who rented office space from Warren--and who also had an affair with Warren's wife.

Couple problems here. Warren is an outsider and people don't like outsiders so when the sheriff and especially his deputy start questioning Warren it's clear that he's in a lot of trouble. And when his wife finally wanders home he's even in more trouble.

This could almost be considered a companion novel to another Williams Gold Medal, that one called, conveniently enough, Man on The Run. What sets them apart from the usual chase novel is the intelligence of the narrator. He doesn't just run, he fights back. In this case he hires a private detective of note to help him find the real killer. And he keeps company with one of those bruised tentative women Williams likes so much--in this case his thirtyish secretary who is smart and decent without being treacly. Finding a sentimental note in Williams is tough unless it's buried in a revery about a woman who has betrayed him.

Triffault filmed this. I saw it a few years ago and didn't like it. Maybe it was my mood. There's a sadness at the heart of the best Williams novels and Triffault, at least for me, didn't get to it. He relied more on the cleverness of the story than the disappointing lives led by Warren and the secretary he comes to love.

This is a short book, a one sitting read, two at most, and an intense, brooding folk tale (as John D. MacDonald described the kind of book he and Williams wrote) that will stay with you for awhile.
Posted by Ed Gorman at 12:24 PM

I've said it before, and I'll say it again: I just don't understand why Williams never got the acclaim of, say, John D. MacDonald. He was just as good as anybody and better than most.

I feel the same as Bill. At his best, which was most of the time, Williams was every bit as good as John D., and often enough an even better line to line writer. A damn shame that his work isn't better known among readers and critics alike.

I've only read a few of Williams' books so far. I was introduced to him through Hard Case Crime. But I've loved every one I've read. I'll try to track this one down. It sounds like one I would enjoy.

Just picked up a copy after a long time searching for something affordable - I remember quite liking the Truffaut, but it is intentionally a light weight souffle, no question about it.

Love this book, and I agree about the movie. Truffaut tried to turn it into a Thin Man-esque romantic comedy mystery. He missed the point (or maybe he just didn't care). I felt the same way about his adaptation of Woolrich's The Bride Wore Black. I understand a filmmaker wanting to make the adaptation something personal, but in doing so he essentially ruined the heart of both novels.