Brash Books: Pro-File with Philip Reed OFF AND RUNNING 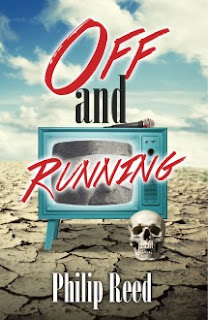 1. I like to call Off and Running a California caper because it goes from the Hollywood Hills, to Pebble Beach, to the Sierra and ends in Death Valley. A journalist gets a big break when he is chosen to write the autobiography of a television icon from the 60s, only to have his subject suffer a stroke, leaving everyone at the mercy of the famous man's psychopathic son.

2. I have two half-finished thrillers, one is a sequel to my horse racing thriller The Marquis de Fraud, and the other is a story of corporate embezzlement called The Fraud Triangle. I also have several non-fiction projects about golf and blackjack. And I'm working a day job as an editor at the automotive site Edmunds.com.

3. It's a great joy when I find I am connecting with readers. All too often, I wonder if people will get it, will understand and participate in what I write. Often, I find that readers are far more perceptive than I imagine. They get it, and they find things I never realized were there.

The other thing I like is coaxing an idea out of the vagueness of my mind. It's interesting how it slowly defines and reveals itself.

4. The greatest displeasure is how hard it is to attract new readers and how the trend seems to be away from reading.

5. My advice is this: don't give up on books. Reading is a singular pleasure that the world needs. Rading does something to our brains that is very good for us.

6. There are many great forgotten writers, myself included. One writer I really admire, and who was kind and encouraging, is Rex Burns.

7. I sold Bird Dog with the help of a wonderful NY agent, John Hawkins whose agency had once represented Jack London. He was everything I ever imagined an agent would be. He got me a two-book deal in three days, then doubled the original offer over the next few days. Bird Dog was published by Pocket Books. I then worked with a wonderful editor, Dudley Frasier, who had known all the great writers of the 50s and 60s.

Philip Reed is a former police reporter who turned to writing mysteries, non-fiction books, plays and screenplays. His latest novel, Off & Running, coming from Brash Books in 2015, is a darkly funny thriller about a desperate biographer who kidnaps his celebrity subject. We can only wonder how much of the novel was inspired by Reed’s experience writing his first book, Candidly Allen Funt, an autobiography of the 1960s TV legend.
Reed’s first novel, the “car noir” thriller, Bird Dog, was nominated for the Edgar and Anthony awards and optioned by Hollywood seven times. His many other books include Low Rider,  Marquis de Fraud, Free Throw, and In Search of the Greatest Golf Swing. He is currently at work writing A Piece of the Action, a non-fiction account of a year spent playing blackjack in casinos across the country with a professional card counter. He lives in Long Beach, California and is an editor at Edmunds.com.
Posted by Ed Gorman at 2:05 PM