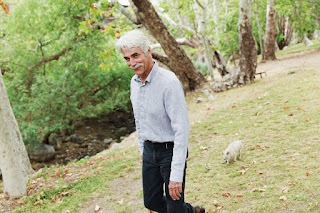 Sam Elliott at his home in Malibu, Calif. Credit
Bryan Sheffield for The New York Times

MALIBU, Calif. — Not too long ago,
the actor Sam Elliott, who has spent
much of his 46-year career alternately
fighting and embracing habitual
typecasting as America’s cowboy, was
referred to as a “male ingénue.”
At 71, Mr. Elliott is not young, and
anyone who’s witnessed the knowing
gleam in his peepers wouldn’t for a
second peg him as innocent. But with
lauded performances this year in
three indie films and guest spots
in two acclaimed television series,
Mr. Elliott is definitely having a moment.
In May, he was named best guest
performer in a drama series at
the Critics’ Choice Television
Awards for his work on FX’s
“Justified.” The film “I’ll See You in My Dreams,”
in which he played a leading man
for the first time in years, opposite
Blythe Danner, steadily drew
crowds despite its limited release this spring. (It was a co-star of that film, Mary Kay Place, who
slyly called Mr. Elliott an ingénue.)
He appeared in another Sundance indie,
“Digging for Fire,” and in February
returned to “Parks and Recreation” to
play the vegan hippie Ron Dunn.
But it is Mr. Elliott’s turn as a spurned
lover in “Grandma,” which stars
Lily Tomlin and opens Aug. 21, that
has garnered him some of his warmest
reviews yet: He brought a ferocious
emotional rawness to the part that
caught critics and even the director
off-guard. Variety’s Scott Foundas raved
that Mr. Elliott had, in 10 minutes on
screen, created “a fuller, richer character
than most actors do given two hours.” The Awards Circuit website said he should be considered
for an Oscar.
“What he does in that moment in some
ways became the emotional core of the film,”
said Paul Weitz, who wrote and directed
“Grandma.” “You’re not used to the idea
that this person is going to expose himself
as an actor.”
Indeed, Mr. Elliott’s resonant baritone
growl, which still weakens the knees of
female fans, and mustache, rendered in
multiple shades of handlebar, have,
over the decades, become synonymous
with stoic, steely dudes: usually cowboys
(“Tombstone,” “The Big Lebowski,”
“The Golden Compass”), followed by
bikers (“Roadhouse,” “Mask”), pilots
(“Up in the Air”) and military men
(“Hulk,” “We Were Soldiers”). That Mr.
Elliott has been able to remain, as a
septuagenarian, the man many guys want to be and gals want to be with is also a testament to his sustained, indisputable, silver foxiness. Commenting
on a video of him speaking in January
at Sundance, one fan wrote, “This man
must be at least 87 percent testosterone.”
In “Grandma,” Mr. Elliott said, he was
able to stretch beyond the narrowed
bandwidth that comes with playing an
idealized type of man. This break from
character, he said, brought a measure of
unforeseen relief.
“I came unglued a little bit, and
it happened in the doing of it,” he said, or, rather,
drawled. “It was a real catharsis, in a positive way.”

And with Lily Tomlin yet. A must-seer.

He's great. I've loved him since "Lifeguard". So glad to see he's "having a moment."