New Book Post Between the Living and the Dead Bill Crider 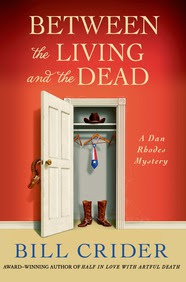 Ed here: I'm just about to start reading this. The Dan Rhodes books are both classic mysteries and one of those created worlds you want to keep revisiting. But as always with just about everything Bill writes there's an undertow of understanding and compassion for vagaries of human existence. Bill has yet to get his due.

Between the Living and the Dead
Bill Crider

I’ve written a lot of books over the years, and my method of writing is haphazard.  I usually just sit down and start writing with no idea where I’m going.  Oh, I have a general idea of things, but I don’t know how things are going to play out from one page to the next.  I can’t help it.  It’s just the way I work.

Between the Living and the Dead was a little different.  It’s the first time ever that I’ve known what the last line was going to be almost as soon as I started writing.  I might not have known what else was going to happen, but at least I had that line.

Let me back up a little.  Here’s what else I knew.  I knew I wanted to write a haunted house book and a ghost story.  That’s something I’ve wanted to do almost since I sold my first book, but I didn’t know how to go about it.  I never came up with the right approach.  When I came up with the last line, however, I knew what I needed.  I needed ghost hunters.

If you’ve read any of the Sheriff Dan Rhodes books (and if you haven’t you should start immediately, if not sooner), you know that there’s a slightly offbeat character named Seepy Benton.  He’s just the kind of guy who’d like to be a ghost hunter.  Now that I had that taken care of, I just needed a haunted house.  No problem.  Every small town has a haunted house or two, right?  And if someone got killed in that house, well, the sheriff would have to investigate.  If there’s a dead man in a haunted house, can the ghost hunters be far behind?  Of course not.

So the story was set in motion.  Here’s something I learned in physics class way back in high school.  I don’t remember a lot of things from that class (it’s a long story; ask me about it someday, and maybe I’ll tell you), but I do remember Newton’s First Law of Motion, part of which says something along these lines: “An object in motion tends to remain in motion until acted upon by an external force.”  A story is like that, too.  Once it begins, there’s just no stopping it until it’s acted on by an external force, like the words “the end.”

I had a good time writing Between the Living and the Dead, so I hope you have a good time reading it.

I'm really looking forward to this one. Blacklin County is one of my favorite literary locations. I agree that Bill hasn't received his due.

Ditto that. I've read only one Dan Rhodes novel--Murder Most Fowl--but I'm hooked.