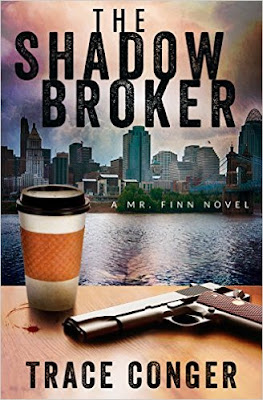 Finn Harding is a private investigator who lost his license for unethical, and really, illegal behavior. A corporation hired him to do a background check on a CEO candidate; what it really wanted was access to the candidate’s medical records. Finn got the file, but he also got caught. Now he is trying to make a living as an unlicensed investigator, which limits the pool of clients to those who work in the shadows (i. e. the wrong side of the law).

Finn is approached by a man who runs a website called The Shadow Brokerage where stolen credit cards, social security numbers are bought and sold. The website was hacked, and the hacker is extorting Finn’s client for $50,000 a month to keep the information secret. The client, a man named Bishop, wants the hacker found, and dealt with. Finn agrees to do the finding, but he doesn’t want to know what “dealt with” means. The job goes sideways, and Finn finds himself running for his life.

The Shadow Broker is an entertaining private eye novel. The setting is Cincinnati, and Finn lives on a decrepit house boat on the Ohio River. He has an ex-wife, a daughter he fears losing, and a father living in a nursing home who wants out. It is written in both first and third person—Finn’s perspective in first—and the author makes it work very well. There is a bunch of violence, and Finn makes a number of bad moves. The prose is smooth, the story interesting, and there are a couple very nice twists.

The Shadow Broker is a finalist for the 2015 Private Eye Writers of America Shamus Award for Best Indie P.I. Novel, and I hope it wins.

Purchase a copy of The Shadow Broker at Amazon.

POSTED BY ED GORMAN AT 7:33 AM NO COMMENTS: LINKS TO THIS POST