Fred Blosser on THE POISONERS by Donald Hamilton 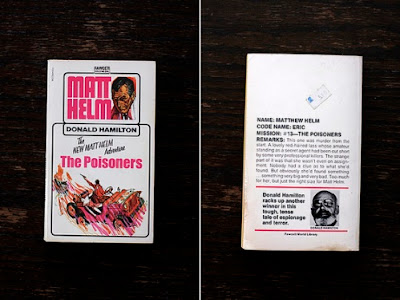 Donald Hamilton began the 1970s with two books from Fawcett Gold Medal.  “Donald Hamilton on Guns and Hunting,” a collection of articles reprinted from “Outdoor Life” and other outdoorsman magazines, appeared in 1970.  (I wish I’d kept my copy from long ago: it’s a relatively pricey item now on the used-paperback market.)  “The Poisoners,” the thirteenth book in the Matt Helm series, followed in March 1971, nearly two years after the previous Helm.  At 224 pages, “The Poisoners” was one-third to one-fourth longer than the earliest, tightest Helm novels.  It continued the series’ turn toward more expansive and often flabbier page counts that became more the norm for Hamilton from the ‘70s on.

“The Poisoners” begins with a familiar premise, as Helm’s boss, Mac, calls him back from vacation for a mission.  Mac orders him to find out who mortally wounded a female colleague in Los Angeles, Helm’s one-time bedmate Annette O’Leary, and oh yes, as a suggestion and not an order, authorizes Helm to take out the killer in turn as a lesson to the competition, whoever the culprit may have been and whatever the motive.  In LA, a local gangster summons Helm and serves up one of his employees, whom he claims committed the murder.  The employee, Basher, a small-time boxer, sullenly goes along with the story and says it was a case of mistaken identity.  But Helm is unconvinced, in part because Basher is too clumsy with the murder weapon, a .44 Magnum revolver, to be a believable shooter.

All of this occurs in the first 30 pages.  The rest involves Helm with a successive array of gorgeous but untrustworthy woman (a Hamilton staple), a hierarchy of mobsters, and Red Chinese agents.  Much of the storyline employs Hamilton’s formulaic playbook from earlier novels and those yet to come, including the ploy of somebody staging a fake assault against Helm or another character, for motives that the seasoned Helm easily discerns.  Compared with today’s world where arsenals of military-grade weapons seem to be a dime a dozen on the streets, it’s quaint that Helm’s weapon of choice is a .38 revolver.  A laser sight on a sniper’s rifle is such advanced technology that Helm calls it a “Flash Gordon gizmo.”

Hamilton’s title, “The Poisoners,” has a couple of symbolic meanings that are associated with the main, interlaced threads of the plot.  One meaning refers to a Mafia scheme that Matt stumbles into, involving the movement of ten kilos of Chinese heroin into the U.S. from Mexico.  The other meaning refers to a bigger Red Chinese operation for which the drug deal is only a cover.  This component of the plot brings back a recurring character from two earlier Helm novels, Red Chinese mastermind Mr. Soo, Mr. Soo isn’t sufficiently colorful, and isn’t on stage long enough, to be very memorable.  Still, I suppose he’s preferable to the Red Chinese villain played for laughs by the late, very un-Asian Victor Buono in the movie version of “The Silencers” (1966), Tung-Tse (the name being one of the movie series’ inane sexual puns -- get it, “tonguesy”?)

To say much more about the Red Chinese operation would give away the twists in the plot, but at risk of a spoiler, I’ll note that Hamilton foreshadows the big reveal by setting the action in LA during a smog crisis, alluding to the offstage disappearance of an environmental scientist, and through Helm, commenting several times on the “damp, chemical-smelling mist” that pervades the city.  I suspect that Hamilton devised, plotted, and wrote the novel with one eye on TV news coverage of Earth Day, the enactment of the U.S. Clean Air Act, and other environmental developments of 1969 and 1970.  Enough said, except to note that, even after Helm figures out the mystery on p. 178, Hamilton still has several surprises waiting in the remaining 46 pages.

You may wonder if the .44 Magnum in the novel was also an attempt by Hamilton to be topical, given that 1971 also saw the release of Don Siegel’s “Dirty Harry,” in which Clint Eastwood’s Insp. Harry Callahan fetishized the sidearm as “the most powerful handgun in the world.”  Nope, chronologically impossible: “Dirty Harry” wouldn’t open until eight months later.  Maybe there was something in the water that year.

“The Poisoners” went into a second Gold Medal edition in 1984 with different packaging.  Aesthetically, the new cover was classier than the old format.  Nevertheless, older fans from the ‘60s are likely to mourn that something minor but significant went out of the series when the old layout was discarded.

I liked even the flabbier Helm novels, although I've never re-read one of them as I have some of the earlier ones. I still have my copy of ON GUNS AND HUNTING. Now all I have to do is locate it.

My favorites were the ones that took place in the Southwest. Which was the setting for many of the early novels in the series. Matt still is a #1 spy for me.

Only one I reread was the first: Death of a Citizen. I might still have all of them in one of the boxes I haven't unpacked in a couple of moves now. Might be sitting on a fortune (and all this time I've been whining about my mother tossing out my baseball card collection)!