[Nate here:] Before we get to M.A.C.’s pre-written blog update, I have a quick update on M.A.C. Dad’s recovery has been going great (aside from the food, but they got the important things right, at least!) and he should be on his way home today. Here’s a picture from this weekend: 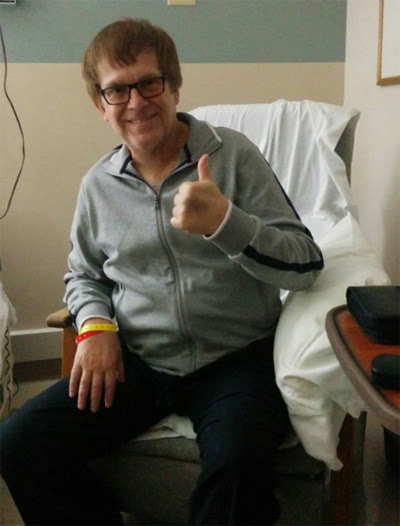 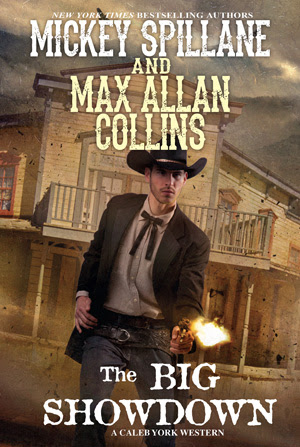 THE BIG SHOWDOWN, second of the Caleb York westerns – there will be at least three – will be published April 26.
This is the first time I’ve published a novel where I share a byline with Mickey Spillane despite there being no Spillane content. As regular readers of these updates (and my novels) know, I have been completing Mike Hammer manuscripts (and a few other novels) that were unfinished in Mickey’s files. He specifically directed his wife Jane and me to do so.
But also in the files were three unproduced screenplays. Two are noir horror pieces that I hope to find a home for, but one was THE SAGA OF CALLI YORK, a screenplay written for John Wayne. I took Mickey’s script and essentially novelized it (could I hate that term more?); I changed “Calli” to “Caleb,” which Calli was short for, though I never use that nickname in the novels, and “Saga” to “Legend,” because the latter term plays better for the narrative at hand.
The trouble was, my terrific editor at Kensington, Michaela Hamilton, wanted at least three books. Rather than leave Caleb hanging (so to speak), I said yes…then for many months drove my wife Barb crazy as I speculated on what to do with the other two novels.
Mickey’s backstory indicated York was a famous detective for Western Union, and I considered doing prequels to THE LEGEND OF CALEB YORK, possibly focusing on real desperados. But it was Barb who rode to the rescue (sorry), suggesting that instead I write a sequel (possibly a series of them) utilizing the setting, characters and conflicts Mickey had created – taking Mickey’s story and letting it really play out. That made it feel more proper to share byline with him.
“Stay in his world,” Barb advised.
So that’s what I did. I had a blast writing it and have already plotted the third, again playing off of what Mickey wrote. Again, I tried to do a western in the Hollywood tradition of Randolph Scott, Joel McRea and Audie Murphy, but with the violence ratcheted up a notch.
I just read the galley proofs and liked it a lot. You may, also.
M.A.C.
[Nate here for the review round-up:]
A nice review for Murder Never Knocks showed up from across the pond on Crimetime, originally posted on Irresistible Target. (“one of the best of the Max and Mickey Mike Hammers.”)
Halifax’s (The) Chronicle Herald gave Kill Me, Darling a much appreciated mention in a recommended reading list for winter vacation, which is apparently a thing. (“Not just a great Mike Hammer novel; a great crime novel, without qualification.“)
The Open Book Society posted a flat-out rave for Quarry’s List. (“The plot is Mickey Spillane and Mario Puzo balled into one and spit out faster than the gout of flame from a jet engine.“) It’s been fun seeing the earlier Quarrys get some nice attention lately, especially since I’ve been reading them again, too, for the first time since pulling them out of my father’s basement library when I was younger than I should admit here.
J. Kingston Pierce’s Killer Covers blog gave a shout-out to The Consummata. Definitely click that link (here it is again) because he features some supremely cool covers there.
The X-Files anthology, Trust No One, got a nice review from the Lawrence Public Library blog, with Max’s short story “The House on Hickory Hill” garnering a special recommendation. (“[Trust No One] brings new life into an area that bookish fans of the program have sorely missed.“)
N.A.C.
Tags: Caleb York, Kill Me Darling, Mike Hammer, Murder Never Knocks, Quarry, Quarry's List, Reviews, Spillane, The Big Showdown, The Consummata, The Legend of Caleb York, The X-Files, Trust No One
Posted in Message from M.A.C. |  1 Comment »
Posted by Ed Gorman at 10:13 AM