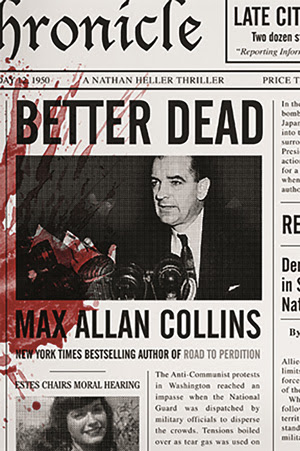 The first Nathan Heller novel in three years, BETTER DEAD takes a step back in time from the JFK Trilogy (BYE BYE, BABY; TARGET LANCER; ASK NOT) to deal with the events of the Red Scare-era 1950s.
This book has been coming for a long time. It’s one of the projects that got set aside when it came time for Heller to make a comeback after about a decade away. To get Heller back out there, I proposed the Kennedy trio, a good bet for a sale because of the high-profile nature of the material; a trilogy with Marilyn Monroe, Jack Kennedy and Bobby Kennedy was appealing. But it meant skipping several things I had planned to do, including a Robert Kennedy/Jimmy Hoffa book that I hope eventually to get around to.
With BETTER DEAD, the tricky thing is that I have two cases for Nate to deal with. Neither seemed right for a single book, but together – with the shared era and a number of common characters beyond Heller himself – the whole just might exceed the sum of its parts.
Joe McCarthy is one of the characters – and factors – that joins the two stories: the Rosenberg “atom spies” case, and the Frank Olson murder. The latter has to do with the Army scientist who was dosed with LSD at a CIA retreat, which had unfortunate results.
Heller is working on the East Coast exclusively this time around – he’s just opened a branch office in the Empire State Building – which puts him right in the heart of Mike Hammer’s world circa 1953. Heller has always had things in common with Hammer, but this time – in this setting – those commonalities come out more prominently. In fact, as the guy completing the Hammer stories from Spillane’s files, I several times questioned whether I’d slipped out of Heller territory and into Hammer. And is that a bad thing? Certainly wouldn’t be the first time.
On the other hand, Heller’s victories can never be as complete as Hammer’s.
Others in the cast include Bettie Page, Dashiell Hammett, Roy Cohn, Bobby Kennedy, and Sidney Gottlieb (the CIA’s Dr. Feelbad).
It’s a wild one. Watch for it May 3rd.