David Thomson on "The Third Man" 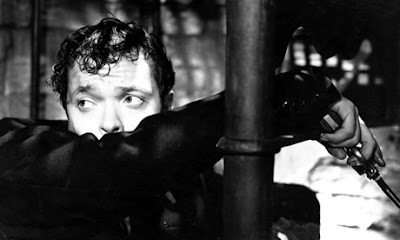 from2011
Ed here: The Third Man was on TCM this morning so of course I watched it. I wouldn't change a single frame. As much as I admire Graham Greene's other screenplays, this is the masterpiece. And Carol Reed, the director and Greene's close collaborator, was every bit as good as Greene.

Here's Thomson's ironic take on the career of Harry Lime. As I watched this I saw Lime as all the Wall Streeters who destroyed a good part of the world. And also on bad guys in general.

How bad is bad? Good enough to make a sequel. In Vienna, just after the war, there was a shortage of penicillin that led to a racket. In The Third Man, this fellow, Harry Lime, cornered the market in penicillin. He was selling it for 70 quid a tube. Then logic occurred to him: he could dilute the stuff but put the price up. It was a kind of murder. "Men with gangrened legs, women in childbirth. And there were children, too. They used some of this diluted penicillin against meningitis. The lucky children died, the unlucky ones went off their heads."

They could be your children. Calloway, the policeman, shows the results to Holly Martins to break that fool's friendship with Lime. In 1949, such scenes were too grim to put in the film itself. But no one stinted on the charm of Lime. He's talked about for three-quarters of the picture, and there he is, like a little boy in a grown-up's coat, hiding in a doorway, with a cat on his polished shoes, and giving that sweet, seductive Orson Welles smile into the camera. Would he smile to see the children in the hospital, or just pop another indigestion tablet to kill the acid? Those kids, he tells Holly, they're like dots on the ground. He offers Holly £20,000, "free of income tax, old man", for every dot that stops moving. It is a Satanic proposition, and The Third Man is a film where Satan has most of the best lines - like the one about Italy under the Borgias and good old Switzerland with centuries of brotherly love and only the cuckoo clock as its prize.

Everyone loved Harry Lime in 1949, even if he had to die, so it was hardly a surprise that after the movie, Lime was back, on radio first - as a hero, a kind of modern-day Robin Hood, a bit of a rogue but a fellow who righted wrongs, someone the poor benighted mugs of the world could rely on.

for the rest go here:
http://www.guardian.co.uk/film/2009/may/22/david-thomson-film-villiains/print
Posted by Ed Gorman at 12:40 PM